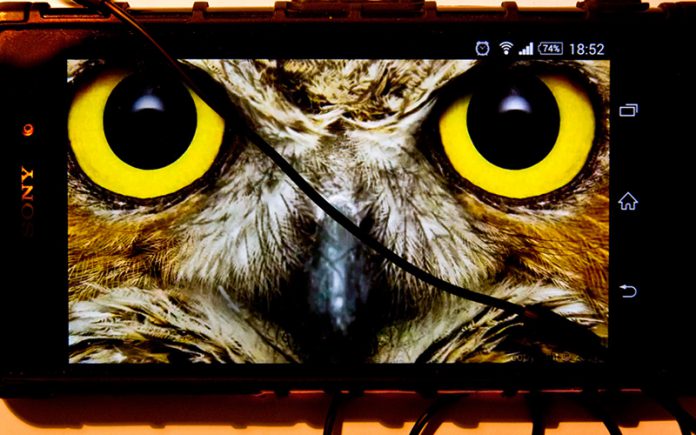 Picture this: you might be walking at night down a street lined with trees, in a rural neighbourhood. You have your smartphone with you and maybe you have your headphones on. Your phone is  playing your favourite songs, receiving texts and emails, connecting to all sorts of social media sites for updates. If you are a health-conscious person, it might be counting the number of steps you are taking and, possibly, via an external sensor, recording your heart rate. It is also likely to be doing a number of other things outside your awareness, most notably routinely tracking your movements via GPS satellite and sending that information to various third parties who want to know all about you for their own nefarious reasons.

Sitting silently and invisible in a tree above you there might be an owl. It will also be tracking your movements, and comparing them in great detail with those of other creatures in your environment. Many of these animals will also be outside your awareness, unless they are larger mammals like cats or foxes that happen to cross your path. In the low light the owl will, no doubt, be able to see your size and shape, and know precisely how fast you are moving. It might be able to hear your breathing, and quite possibly it can hear the tiny, tinny sounds that leak out of your headphones, and the brief chirps of notifications from Facebook and Twitter. And of course it can see the brightly coloured screen of your phone from a great distance. Does the owl care about these things? Probably not, if you are not perceived to be a threat or a new type of prey.

As you move down the road you are moving through a world that is very new to human beings. You are wirelessly connected to the vastness of the internet, something inconceivable just a few years ago. You are immersed in this brand new world of screens, sensors and algorithms that is now dominating almost every aspect of human existence. But does this mean you really understand your world in any detail?

Up above you the owl has great sensory perception, and you, down below at street level, have access to unprecedented amounts of knowledge and data. But what if you wanted to be more like the owl, and see the world with an expanded and immediate sensory awareness unmediated by technology?

There is actually a very simple way to start to do this. Human beings have two visual ways of perceiving the world. Mostly we rely on on our forward vision, focusing on what is immediately in front of us. This is known as foveal vision and if you have healthy eyesight it allows you to see the world in front of you with clarity and focus. It is also the kind of vision that humans are now relying on very intensively, as so much of our time is taken up with studying all sorts of screens of various sizes. It is a type of vision closely associated with pattern making and logical deduction. But it is also limiting in that it excludes a great deal of potential visual information.

Humans also have peripheral vision. Normally, we don’t tend to rely on this faculty much, as it doesn’t provide the clarity and sharpness that we see up ahead in the visual field. But our peripheral vision is far more sensitive to differences in light and dark, and to movement. If you train yourself to notice these subtle differences immediately outside the main focus of your vision, your sensory perception may become greatly enriched. With careful practice, you are likely to start noticing that the world contains much more movement than you might have previously considered possible. In the street, in the daytime, you might notice simultaneously the movements of traffic, and those of distant pedestrians, as well as the flight of birds overhead. You might also notice the movement of the wind in the trees. A crowded room can become a place of fascination as you start to notice more of the subtle intricacies of human interaction. And while all this is happening, you might also become aware that your mind starts to becomes calmer, as the usual mental chatter begins to quieten down. Continue to practice this skill and you might also notice that your perception of the subtle qualities and the three dimensionality of sound increases.

Martial artists have known about the advantages of using both types of visual perception for centuries. These days, many sports coaches teach players and athletes how to improve their perception in this way. Some public speakers and those doing training workshops also use these skills to track with precision the reactions of their audiences.

To take this process a stage further you can engage your imagination and change how you perceive the passage of time. If you imagine an upcoming event in your foveal vision running far more slowly than usual, while everything in your peripheral vision runs much faster, then your overall perception of time will be likely to accelerate when the relevant moment arrives.  Do the opposite and time will seem to slow down. Visualise and practice these skills ahead of an event which you wish to perceive differently in time and see how your perception of detail changes. Put the technology aside for a while and engage with the world in a new way. But do take care: owls are used to living in a highly sensory world and most humans are not. These are powerful techniques so don’t use them where your safety may be compromised.

Dr Milton Erickson (1901-1980) is considered by many to be the father of modern clinical hypnosis. Despite suffering from a number of physical and sensory disabilities throughout his life he was also known for his extraordinary and sometimes uncanny perceptual awareness. In his later years, students used to travel from afar to his home in Phoenix, Arizona for his teaching seminars. One day some of them decided to put his awareness to the test. His room was filled with ornaments and artefacts he had collected over the years. Someone moved a small statue of an owl into a different position on a shelf. Erickson’s wife brought him into the room in his wheelchair and he began the class. To the student’s disappointment he made no comment. Later, his wife returned to move him from the room. As he was being wheeled out he was heard to say in his gruff, slow voice: “You know that thing that you were concerned about? Well, I don’t give a hoot about it!”

This is the second of a two-part series on owls by Nick Taylor (see Silent hunters in our midst).