On Wednesday, June 2 a road traffic accident took place in Pett Level, resulting in one person being airlifted to hospital.

Local residents and builders working nearby were among the first on the scene to assist the injured. Emergency services, including Sussex Police, crews from the East Sussex Fire Service at the Ridge and Hastings, and the South East Coast Ambulance Service (SECAmb) and the Air Ambulance all attended the incident. 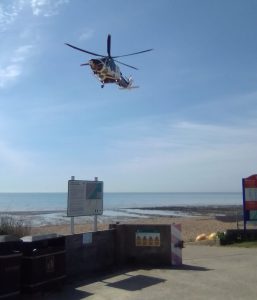 As the accident completely blocked the road in both directions for a time, volunteers from the Pett Level Independent Rescue Boat assisted in managing the traffic and in facilitating an area for the air ambulance’s arrival. The air ambulance landed on the beach just beyond the sea wall at the Pett Slip.

The air ambulance then transported one of the injured to the Royal Sussex County Hospital in Brighton, whilst another injured person was transported by ambulance to the Conquest Hospital in Hastings. The road was reopened within a few hours of the collision.