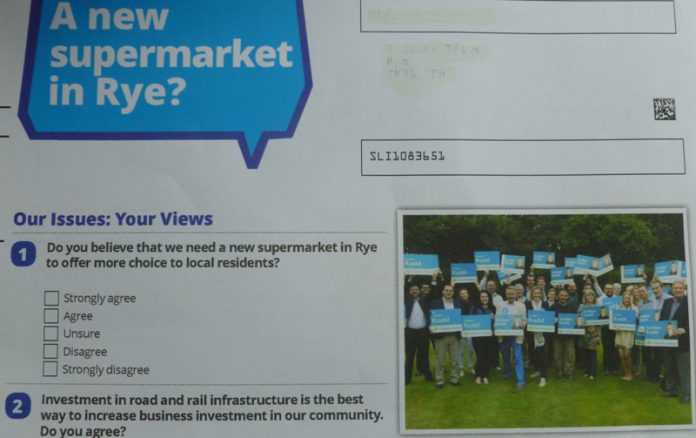 Local MP Amber Rudd’s recently launched survey of local views has been overtaken by events as some bus cuts may not now happen, or be less than expected; and the supermarkets Tesco and Sainsbury’s are not going ahead with their plans in Rye. However she may still have to talk to the supermarket bosses (as she said she would) because of the growing need for more school places, and the land next door to the schools (no longer wanted by the supermarkets) may be sold off for the best price they can get.

BUS CUTS: Her news is that Stagecoach is willing to take over on a “commercial basis” rural routes 340/41 and 344. But, she warns, the services could still have “some alterations”, but not as drastic as those proposed by the county council. The 340/341 service from Tenterden to Hastings via Northiam, Broad Oak and Westfield was to be cut from an hourly to a two hourly services. A similar cut was proposed for the 344 from Northiam through Peasmarsh to Rye, and onwards through Winchelsea Beach, Pett Level and Fairlight to Hastings, and Amber says “we must keep up the pressure on the county council” in respect of other services facing cuts – like the proposed two day a week 326 service in Rye. However no one knows yet what services Stagecoach will actually run on the 340/341 and 344 routes.

THE SUPERMARKET SITE: If Sainbury’s and Tesco jointly sell the “supermarket” land in Rye, it may be the case that a new supermarket never opens – and other development forces the recently built schools to move in order to expand. However it is the statutory responsibility of the county council to ensure sufficient school places are provided, and Amber may need to push the county council on schools as well as on buses.

HIGH SPEED RAIL: Amber also wants to know whether local people agree or disagree that we need a new High Speed rail – which she says will stop at Rye. However recent documents from Rother District Council do not mention the High Speed stopping at Rye, and it has been suggested – see link – that the High Speed would run on an elevated track above possible floods, leaving Rye with no trains at all possibly. Some concern about this has already been expressed within the local pressure group Marsh Link Action Group (MLAG), but a Network Rail representative said earlier this year in a packed Town Hall MLAG meeting that the High Speed would stop at Rye, and either overhead wires or a third rail would be needed. No mention was made of a high level track. However the MP’s questionnaire may add to the concerns and uncertainty. Currently around 100 people are said to have season tickets to London and there are concerns that High Speed would increase the number of commuters living in Rye, and force up house prices. However many visitors to Rye also use rail services and the service is much used off peak by all age groups who do not have access to a car.

Both Sainsbury’s and Tesco face strong competition from discounters like Aldi and Lidl, who both now have stores in Hastings (or will do so shortly), so are rethinking their strategies – and their competitors may decide they are close enough to Rye customers anyway – by being either in Hastings or Tenterden. And local residents seem to have voted with their feet and fingers by catching supermarket supplied buses to other places, or by ordering on line and getting deliveries to the door from at least three or four supermarket delivery vans regularly seen around town. Amber also asks about the most urgent issues facing residents and the list includes speeding, access to amenities, roads and pavements, fishing and school standards. But parking does not feature in her list though it is regularly on the Town Council agenda – and neither does the need for more school places.