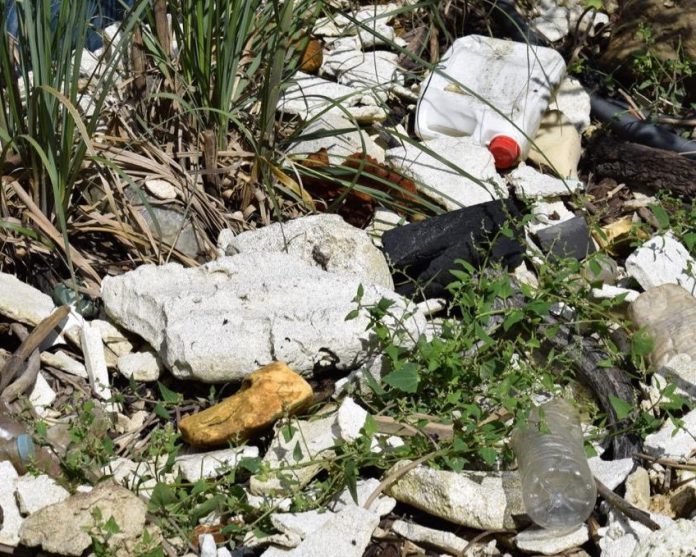 Even the quiet cove at Fairlight has not escaped the scourge of plastic pollution and below the cliffs, the beach has been littered with a steady build-up of rubbish trapped behind the three rock berms, with an abundance of polystyrene which would simply remain on the beach forever if action were not taken.

But local volunteers decided enough is enough and began an eight-session clean up operation. Planned and run by Strandliners – a Fairlight-based community interest company which collects data on plastic pollution – this vital clearance work is taking place in partnership with Surfers Against Sewage and the Pett Level Independent Rescue Boat (PLIRB).

Strandliners’ CEO Andy Dinsdale explains the importance of this work: “We survey the trash because the data gained builds a bigger picture – national and international – providing a firm base to lobby for change to stop pollution at source.”

During the survey and sorting, volunteer leader Beverley Coombes shared, “We are now at the midway point in the Fairlight Berm project with the first three sessions yielding more than 60 bags. It’s all plastic – mainly a mass of polystyrene pieces and plastic bottles.”

So, if you spot tarpaulins and sacks full of rubbish at Fairlight Cove, it’s the work of dedicated Strandliners volunteers. All being well weather-wise, it’s planned that on Sunday September 6, after the final count and clearing session by Strandliners, the rubbish bags will be picked up by the PLIRB and taken round to the Pett Level slipway.

PLIRB Chair, Fiona Johnson is pleased that they are able to help Strandliners, as the charity recognises the environmental aspect of the beaches as an important part of their work in the community.

“PLIRB has been at the heart of its East Sussex coastal community since the early 1970s,” Fiona explains. “The fragile coastal ecosystem is one to cherish and preserve, so we are delighted to volunteer our support for Strandliners in their quest to maintain and improve this coastal environment for the marine life which depends on it, and for the benefit of future generations to enjoy this wonderful place.”

Once back at the Pett Level slipway, Strandliners will be on hand to answer enquiries about the task and to share information on how the community can get involved in protecting the coastline.

“This is a real community effort,” Andy shares. “We cannot do this without the Pett Level Independent Rescue Boat and we are so grateful to Darren and the PLIRB volunteers. Thanks also for the backing from Rother District Council and Biffa, plus of course the support from Surfers Against Sewage. All play a significant role in the success of the clean-up – making a safer beach for marine life and a more attractive one for walkers. Thank you to everyone who is taking part.”

If you would like to know more about Pett level Independent Rescue Boat please go to https://plirb.com.