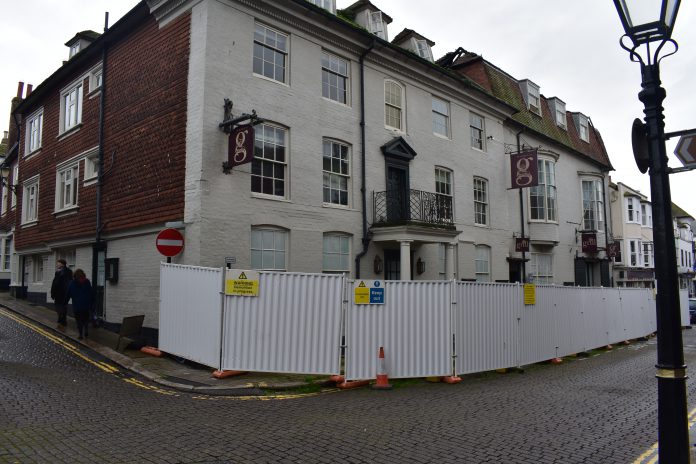 Following a meeting scheduled last week with the ESCC highways authority, it is expected that scaffolding will very shortly now be erected outside the George Hotel.

The building has stood open to the sky for three months since the outbreak of the disastrous fire on July 20. Much public concern has been expressed at the lack of weather protection against the recent torrential rains and the damage to the interior that this may have caused.

However, in a press statement issued last week the proprietors stated that “we have been advised by our structural engineers and architects that the water damage that was sustained during the fire means that the current wet weather is unlikely to do any further harm.”

Among the reasons for delay have been fears for the integrity of the structure. The scaffolding design is required to be free-standing, but with internal supports and a stabilising outreach into Lion Street. This has raised serious implications for free movement of traffic through the town, and required lengthy discussions with the highways authority before an appropriate design could be approved.

Now that the team of experts, of architects, structural engineers, and other building specialists is assembled, we can expect more detailed updates of progress. Meanwhile, we wish Alex and Katie Clarke well in their highly complex restoration project.