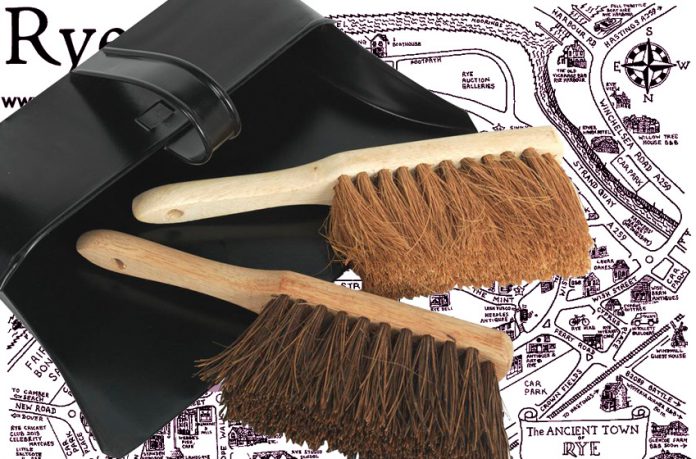 There was never really any doubt that Rye was going to get its odd job man, a “town steward”, such was the enthusiasm of many councillors for the creation of the post. But there was a surprise at Monday night’s meeting when Cllr Granville Bantick announced that he’d had a change of heart following a recent incident in the High Street when, for the second time in two months, two fire appliances had been obstructed by illegally parked vehicles. This he said, reading from a prepared statement, was why he considered that the appointment of a community traffic warden was now a greater priority than a town steward.

His change of heart did not win favour. He proposed a motion to this effect, but no other councillors came forward to second it. So the matter was dismissed without going to a vote. However it did not go away.

Bernadine Fiddimore, the mayor, said that while she was sympathetic to Bantick’s aims the costs of a traffic warden scheme were likely to be too great. Even if the money could be found she believed the scale of the problem would be too great for one individual. Many instances of illegal parking occurred outside working hours when no warden would be available, she added. (Later Cllr Gemma Blumire was to accuse councillors themselves of not respecting parking regulations when attending meetings during the evenings.)

The mayor said she believed the town steward proposal was a unique opportunity for Rye Town Council to improve the environment and regain a small amount of the authority and status it had lost with the transference of powers and assets to Rother District Council in 1974.

Cllr Michael Boyd stood up to warn the meeting that the council was likely to become divided into opposing factions over the appointment of either a traffic warden or steward.

In fact, the divisions seemed to be deepest among those in the public gallery. John Howlett, chairman of the neighbourhood plan transport group, said he had spoken to many people and found a unanimous view that “this town needs a traffic warden, however limited his or her powers are, and that if you appoint this steward with his odd jobs, this odd job man, you really will be a laughing stock because the traffic problem is a matter of life and death now”.

Anthony Kimber, chairman of the neighbourhood plan steering group, strongly seconded this opinion and added: “We do really need a short-term solution to our traffic problems and having looked at the very clear statements from the police commissioner and local authorities I cannot see that you are going to get any other solution other than a community traffic warden. I have seen them operating very effectively elsewhere despite the obvious criticism that they have limited powers.”

Pat Hughes, of Rye Community Transport, said that the residents she had spoken to were of the opposite opinion. “They think the appearance of the town and the physical problems caused by things not having been maintained, or being damaged, or becoming overgrown, were far more important to get put right than the issue of car parking and overstaying of car parking. As we are only too aware, in the High Street and East Street and Market Street, the serious overstaying of parking is nearly all by residents of those areas or people who are associated with businesses.”

Hughes went on to blame the Chamber of Commerce for failing to persuade its members to park responsibly in the town centre.

Cllr Jo Kirkham berated members of the Campaign for a Democratic Rye, such as Bantick, for having first raised the issues about the appearance of the parish, then just as the town council was in a position to take action he and others had chosen to delay the process by deflecting attention away from it.

Cllr Mike Eve suggested that while the appointment of the steward be on a self-employed trial basis, he considered that managing traffic was more important. He thought that the town council could use its funds to pay the police for more traffic enforcement. He cited how, on several occasions recently, film companies had paid the police to manage traffic in the centre of Rye. However, Richard Farhall, town clerk, advised him that Chief Insp Warren Franklin, Rother District Commander, had now rejected this suggestion.

After a discussion of the technicalities of the appointment, including the terms of contract, the council reached its verdict by a majority of 10 to 3. The odd job man would be a council employee working for 20 hours a week. Initially, the contract would run for a 12-month trial period.

There was a considerable amount of noise in the council chamber after the vote. As a result the reading out of the final item on the agenda, “67 Obstruction of fire appliances attending town centre incidents” was practically inaudible. No one, it seemed, wanted to discuss this and the meeting broke up.

Outside the chamber a councillor’s voice could be heard downstairs loudly exclaiming: “We got what we wanted!” History of a kind had been made with the council agreeing to make its first external appointment in 40 years.

To find out exactly what the job of town steward might entail, see Rye News’ story A job to keep up appearances