Gas contractors were busy on Saturday morning, April 4, on the works in Bridge Place to update the gas mains, and the largest excavation took an 18 foot bite out of one side of the road next to Rye’s railway bridge.

Traffic was diverted, but one health worker in NHS uniform early in the day at 7am only apparently wanted to get up Rye Hill – and no further. So, having been told about the diversion round Appledore, she parked her car and walked up the long hill with a large knapsack, possibly heading for either the hospital or sheltered housing at the top of Rye Hill in Rye Foreign.

However at 11am another driver passed me in Deadmans Lane going the wrong way in order to reach Rye Hill from The Grove. Vehicles coming from the other direction had fortunately on that occasion paused at the entrance to Deadmans Lane.

But, please note, East Sussex County Council is allowing you on the night of April 20 to drive along Deadmans Lane in both directions between 11pm and 6am because of work on The Grove level crossing. 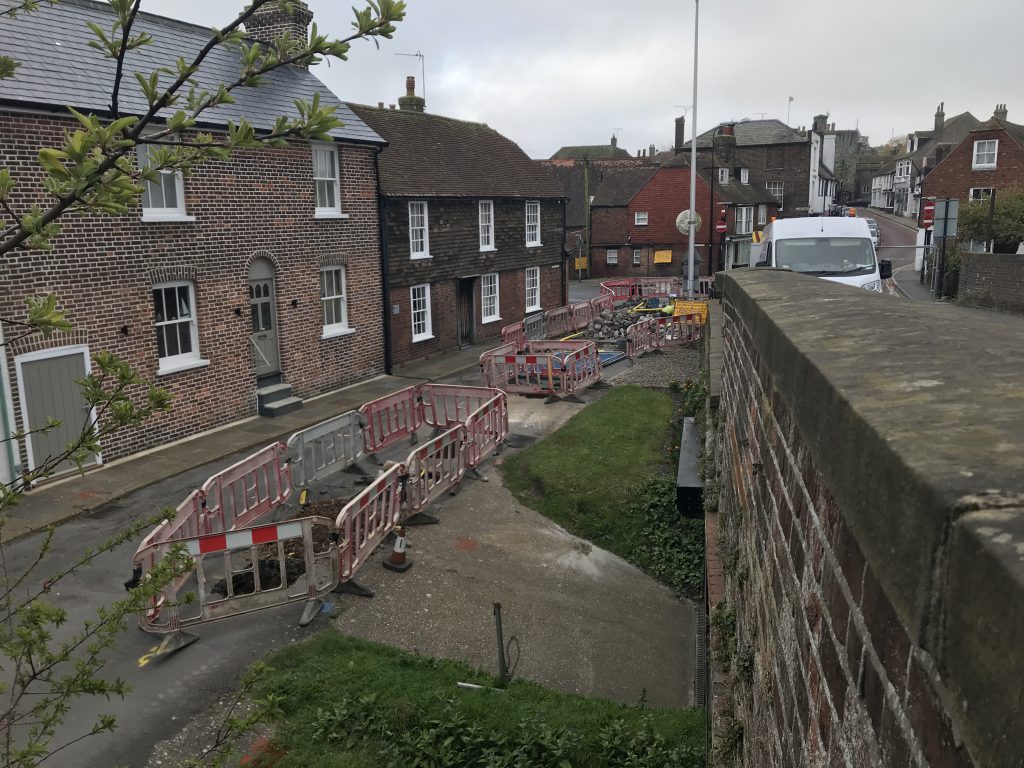 Further back down Bridge Place the excavations (as the photo shows) take up much less space, and could perhaps have been used for the contractors equipment (with better planning) instead of closing the main road.

Indeed the area of the main road, now dug up to expose a maze of pipes – old and new – is about the same size as recent works in Udimore Road by the Mason Road turning, when the kerb was replaced, and the path redone, by the bus stop.

In that instance unmanned traffic lights worked perfectly in organising single file traffic on a busy road, and one wonders why this was not seriously considered by East Sussex County Council’s Highways Department.

Indeed recent correspondence from the network managers SGN seems to blame ESCC for approving the closure on Rye Hill. However the sub-contractors seem to be getting on with the work, and a lengthy job seems to have got shorter and shorter…. so far. But watch this space.

In the meantime you have been warned. See photo below.

Speaker for the Cinque Ports