As the unlocking of restrictions continues, additional busy-ness at local beaches is very likely – and already May has begun in a busy way for the volunteers at Pett Level Independent Rescue Boat (PLIRB).

The first official task of 2021 came on Sunday, May 2, when HM Coastguard requested PLIRB to launch and assist, following sightings of individuals stranded at the base of the Fairlight Cliffs – and the charity’s larger Pulfer boat was launched with three crew aboard.

A total of three people – an adult and two teenagers – plus three dogs were located. The group were on rocks, caught by both the tide and a real shower of wet and windy weather. The individuals and their dogs were all assisted into the boat, before being returned safely to Pett Slip – and there were no casualties.

Then, just before noon on Wednesday, May 12 PLIRB was again tasked by HM Coastguard, this time to assist kayakers who were reported to be in the water and in difficulties off Fairlight Cove.

The Pulfer boat was launched with three crew, who attended the scene and located two kayakers. Both had fallen into the sea and had experienced difficulties getting back on to their twin kayak.

Kev Nuttall, chair of the PLIRB charity committee and volunteer driver of the service’s launch vehicle, arrived at the boathouse within minutes of the initial call to action.

“The beach team arrived within 10 minutes and had the boat’s engine already run up and on the sea wall, ready to go as the boat crew arrived and got kitted up,” he explained. “The launch took place within 15 minutes and the crew was on the scene, with the kayakers, within 20 – 25 minutes of the call out.

The kayakers managed to get back on their kayak, but they were quite exhausted and grateful for a safety escort back to Pett Slip by our team. So, there was a rapid response and a successful conclusion. Our volunteers then ran down, refuelled and cleaned up the boat, sanitised the shared areas and put everything away, ready to go for next time.”

Be vigilant for danger signs

For the local rescue service, both of these recent incidents highlighted the importance of being aware of personal safety and of the well-being of others at local beaches. 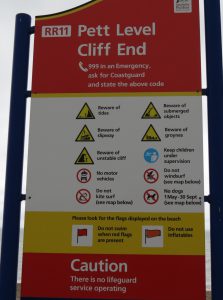 In the first incident, the group were visitors from out of town who had not been vigilant to advice given by locals about the speed of the incoming tide, or to the warning signs at Pett Level Cliff End.

The second incident demonstrates the importance of vigilance on the coastline, which was the subject of a recent National Fire Chief Council’s #BeWaterAware campaign.

Although the kayakers were unharmed, the sea was choppy and the situation could have been very different. The PLIRB volunteers were able to reach the scene in just minutes because concerns had been reported quickly by a vigilant member of the public.

After the busy beaches last summer, the volunteers at PLIRB have already anticipated the need for greater vigilance as the current lockdown lifts and the beach, base and boat teams have organised a rota of increased boathouse presence, to cover both Saturdays and Sundays across peak times and to include pop-in visits during the week.

“It’s important that, with many having a staycation and people not always being able to go abroad, everybody’s needing to get out from home and go somewhere different and – being in a beautiful part of the country – we’re expecting to be inundated and we’re seeing an increase already,” Kev shared.

“The fact that we’re not just there on the Sunday mornings for our usual team sessions, but also at other times, gives confidence to people that there is support and help there if they need it.

“We’re also there to advise on tide times, on how to have a safe and enjoyable stay using our stretch of the beach, and also to provide first aid for anybody who might need it. And of course, it means our volunteers are providing a ready presence for those search, rescue and water safety incidents.”

Tips to save lives

As the season looks set to become even busier once the weather improves, PLIRB volunteers want to get the message out there that being vigilant can save lives:

Pett Level Independent Rescue Boat is a self-funded charity, run by volunteers. If you would like to know more, please visit https://plirb.com.