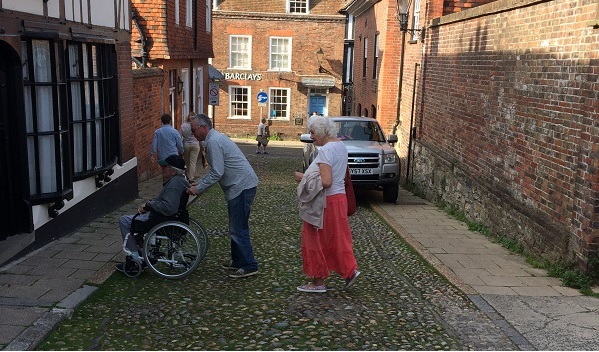 Is it my imagination but is parking getting even worse in Rye? Specifically people parking on pavements?

On a short 90-second walk down We st Street on the afternoon of Sunday September 24 I came across not one but three cars parked on the pavement. Parking on the pavement seems to be endemic around town. It causes an obstruction and inhibits people walking, especially vulnerable people such as older or disabled people with visual or mobility impairments.

On this occasion an older man in a wheelchair had to be helped across the road from one pavement to another because a large car had parked right across the pavement. When did parking on pavements become an acceptable thing to do?

The Highway Code is explicit on the subject: ‘You MUST NOT park partially or wholly on the pavement in London, and should not do so elsewhere unless signs permit it. Parking on the pavement can obstruct and seriously inconvenience pedestrians, people in wheelchairs or with visual impairments and people with prams or pushchairs.’ (Rule 244). Parking on pavements has been illegal in London since 1974. A number of local authorities have followed suit and last year the government promised to review current legislation and assess the implications of changing it. In April 2017 they went on to commit to undertake a review of traffic regulation orders during the summer. Lets see what they come up with.

What the government seems to have overlooked is that the legislation already exists in the form of the Highways Act of 1835 which banned driving onto a pavement.

The issue seems to be that because this is a criminal offence it is a police matter and not a local authority matter. With police thin on the ground, and Rother District Council prevaricating over hiring parking enforcement offices, it means the situation continues to get worse in Rye.

But legalisation and local authority aside, when did drivers become so selfish that they think it’s acceptable to park on the pavement and force an older man in a wheelchair struggle to cross Rye’s cobbled roads?