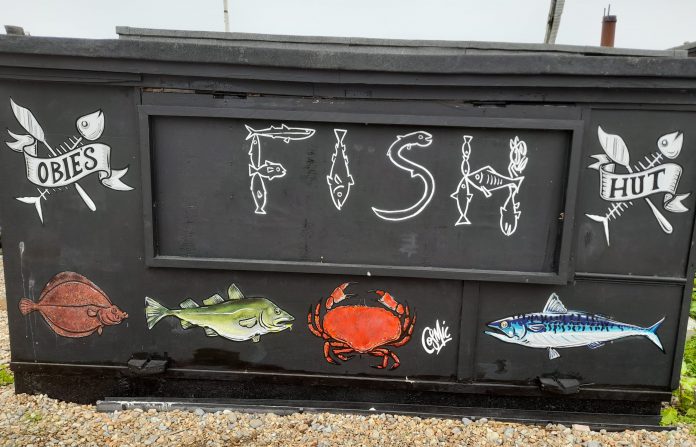 While Rye centre was noticeably quiet, (pity, the High Street could have been a great space for a get together, royal or republican) as reported there were several locally organised parties for the Jubilee in parts of the town and, of course, at Tilling Green. I decided to meet friends in Hastings as there was music advertised at the Fisherman Sea Anglers Association and an emporium of local artisans stalls in the Stade Hall. I did expect, as is usual on Sundays, a diverse crowed mingling in the pubs and on the street in front of Hastings Contemporary, the art Gallery at Rock-a-Nore Road near the old town, but it was very empty of people. Either they were queuing at an airport, celebrating in their local streets, in London at the palace extravaganza or watching it on TV.

As an alternative we made our way along the fishermen’s huts and enjoyed the visible historic heritage that is still retained by the fisher community. Maggie’s fish and chip restaurant had a queue. One needs to book on certain days because she is famous for her food. During the week, lovely fresh fish and cockles can be had. We visited the emporium with its stalls of artisans’ produce in the Stade Hall which was interesting. There were no Jubilee celebrations in the big space of the Stade which was surprising.

Arriving at the Hastings Sea Angling Association (it’s a club but one does not have to be a member) we were lucky enough to sit on the balcony, looking out onto the sea on one side and the merry go round (which children love) on the other side. It was a nice and friendly atmosphere with very reasonable prices for food and drink and at 2pm the band started. The Secret Agents, a three piece cover band playing a mixture of blues, rock and Beatle numbers were excellent and would get people easily dancing at an evening gig – well worth checking out. www.thesecretagents.co.uk

The Sea Angling Association often has great jazz bands on a Monday evening; again it is worth keeping an eye on what’s happening there. Contact 01424 426644 or office@ehaas.club