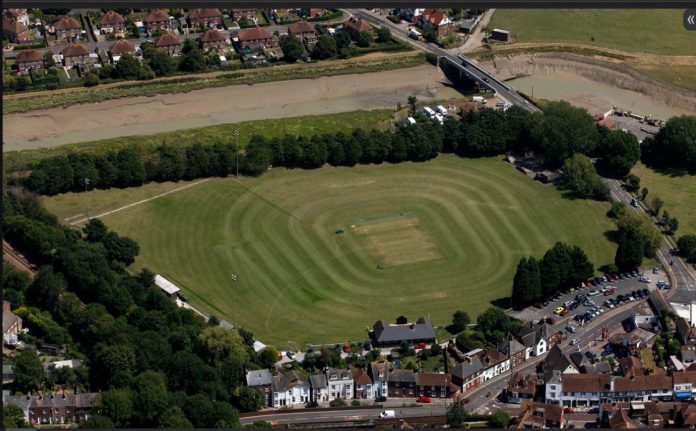 This Saturday, Rye 1st X1 will welcome St Peters to the Rye Cricket Salts in a crunch League encounter. After 11 games of the 18 match season, Rye trail by just 5 points. A win for either side will give a distinct advantage in a league with only one confirmed promotion spot.

The team finishing second will be in a play off against the second placed team in Division 3 West.

Rye exacted revenge last Saturday over Ifield, the only team to defeat them this season. At the Salts a rain affected match went Ifield’s way. On Saturday, Rye managed the game well on a challenging wicket. Ifield batted first and scored 171 all out off 37 overs. At the top of the innings Craig Pierce 4-27 and Tobias Farrow 2-42 dismantled the Ifield innings. Only Graeme Dean 42 offered resistance. There was a late flourish from Ifield as the last two wickets added 80 runs. Stand in wicket keeper Luke Payton took 4 catches.

Rye’s response was led by Dan Stickels with 67 off 100 balls. Luke Payton chipped in with 40 off 53 balls. Rye were seen over the line in the 38th over by Reuben Collingwood with 25 and Tobias Farrow 11 not out, thus setting up this Saturday’s fixture for a showdown.

Rye’s 2nd X1 woes continued. In a difficult season of seemingly poor luck and the 28th player turning out on Saturday, Rye just knew they would lose the toss and bat on a wet wicket. The Herstmonceux attack took full advantage of the conditions, as the ball moved around in an exaggerated fashion. The Rye batsmen offered stoic resistance as the ball was difficult to move off the square. Only 40 runs came off the first 20 overs. Harry Rhys Jones provided impetus with 35 off 33 balls, but whenever anybody else struck the ball, Herstmonceux took three fine catches. Rye were finally dismissed for 115 in the 40th over.

The Herstmonceux reply took place on a dry wicket and a sun beating down. The team chasing promotion made short work of the total, reaching it in 22.4 overs. Ryan Bennett with 41 led the way. Ross Pierce 2-31 the pick of the Rye bowlers. This Saturday, Rye 2nds travel to Brighton to play St Peters 2nds. The Thirds travel to Hastings to play Sidley 2nds.

The Junior Section continue to be the victim of the inclement weather. The Under 11A fixture v Ashford Town was washed away. The Under 11B fixture was switched from Tenterden to Rye. A very good game entered in a close 5 run defeat to Tenterden U11A team.

On Sunday, the softball cricket Dynamos team played a good game against Robertsbridge. Both sides playing their first competitive fixture. Robertsbridge return to play at Rye next Friday. This Friday, the Dynamos and All Stars Sessions finally finish after many rain interruptions. Next Friday there will be a presentation evening for both groups including a barbecue.