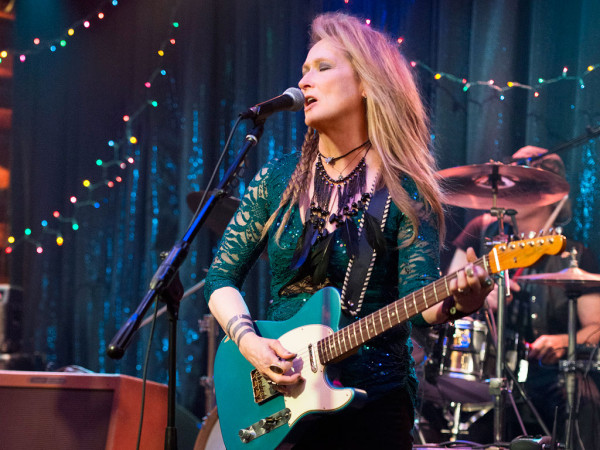 Films showing in Rye from Friday October 18 include :

Ricki and the Flash [12A] 101 mins   Three-time Academy Award winner Meryl Streep goes electric and takes on a whole new gig – a hard-rocking singer/guitarist – in the uplifting comedy Ricki and the Flash. In a film loaded with music and live performance, Streep stars as Ricki, a guitar heroine who gave up everything for her dream of rock-and-roll stardom, but is now returning home to make things right with her family. Streep stars opposite her real-life daughter Mamie Gummer, who plays her fictional daughter; Rick Springfield, who takes on the role of a Flash member in love with Ricki; and Kevin Kline, who portrays Ricki’s long-suffering ex-husband.

Dope [15] 103 mins   A critical hit and audience favourite at the Sundance Film Festival and in competition at the Cannes Film Festival 2015, in Dope, Malcolm is a geek, carefully surviving life in a tough neighbourhood in Los Angeles filled with gangsters and drug dealers, while juggling college applications, academic interviews, and the SAT. His dream is to go to Harvard. But a chance invitation to an underground party leads him into an adventure that could allow him to go from being a geek, to being dope, to ultimately being himself. A well-acted and witty comedy with a superb performance from Shameik Moore, with Kiersey Clemons and Tony Revolori (The Grand Budapest Hotel).

Me and Earl and the Dying Girl [12A] 105 mins  Winner of two awards at the 2015 Sundance Film Festival, this is a uniquely funny and moving story about Greg who avoids deep human relationships as a way to safely navigate the social minefield that is teenage life. In fact he describes his best friend Earl, with whom he makes short-film parodies of classic movies, as being ‘more like a co-worker’. But when Greg’s mum insists he spends time with Rachel – a girl in his class who has just been diagnosed with cancer, Greg discovers just how powerful and important true friendship can be. Starring Thomas Mann and Olivia Cooke.

Legend [18] 131 mins  The true story of the rise and fall of London’s most notorious gangsters, Reggie and Ron Kray, both portrayed by Tom Hardy in an amazing double performance. Legend is a classic crime thriller taking us into the secret history of the 1960s and the extraordinary events that secured the infamy of the Kray Twins. Written and directed by Academy Award winner Brian Helgeland (L.A. Confidential, Mystic River), also starring David Thewlis, Christopher Eccleston and Taron Egerton.

Big Hero 6 (2D) 108 mins [PG]  When a devastating event befalls the city of San Fransokyo and catapults Hiro into the midst of danger, he turns to Baymax, a super-sized inflatable robot and his close friends and transforms them into a band of high-tech heroes called ‘Big Hero 6’. Disney’s action-packed comedy-adventure is a delight and won an Oscar this year for the Best Animated Feature Film.