Rye is proud of its literary heritage and it continues to attract readers and writers alike. There are many literary events through the year, particularly at The Rye Arts Festival, which will be celebrating 50 years in September. Book lovers will enjoy browsing in the Rye Bookshop in the High Street which has a section devoted to Sussex writers.

Visitors can find out more about two famous residents,  Henry James and E F Benson, who lived at Lamb House, which is now owned by the National Trust and open to the public at certain times of the year.  See website for more information.

The house was built in 1722 by James Lamb, a wealthy wine merchant and local politician. In the winter of 1726 King George I took refuge at the house after his ship was washed ashore at nearby Camber Sands.

The list of writers who have made Rye their home is shown below so you can enjoy a literary trail.

American author Henry James was captivated by Rye.  He was 55 when he moved in to Lamb House and already an established literary figure on both sides of the Atlantic.  Many literary figures visited him there, including H G Wells who lived in Sandgate near Folkestone, Edith Wharton, Rudyard Kipling, Ford Maddox Ford (novelist, poet and editor who lived in Winchelsea) and Max Beerbohm, caricaturist and writer whose wit captured the absurd and pretentious.  Find out more about Henry James at Lamb House

Rye’s famous and best loved author is probably E F Benson who lived at Lamb House with his brother after Henry James’s death in 1916.  Benson’s fictional town of Tilling in his Mapp & Lucia novels, is based on Rye and was  made into a series by the BBC a few years ago.  Visitors to Lamb House will be able to find out more about the making of Mapp and Lucia thanks to a small display made possible as the result of location fees for the filming. Bombed during the Second World War, the garden room at Lamb House was recreated for the BBC filming of Mapp and Lucia. 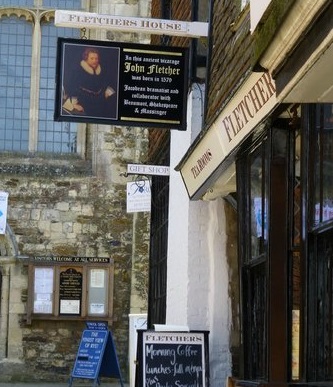 John Fletcher, the English dramatist was born in Rye, Sussex, the third son of a clergyman who later became a Bishop of London. Fletcher collaborated with several playwrights including Shakespeare, Beaumont, Massinger, and Rowley. Fletcher was closely associated with Beaumont and their dramatic works compiled in 1647 contained 35 pieces’ another folio published in 1679 – 52 works.  Fletchers House is a now a restaurant and tea room.  Sit by glowing log fires in this beautiful historic buildings or enjoy the attractive terrace garden in the summer.

Rumer Godden was the last of the three famous writers who lived at Lamb House. She is perhaps best know for Black Narcisuss and The River which were both turned into films. The BBC recently made a new serialisation of Black Narcissus which can be watched on iPlayer. Radclyffe Hall was a regular guest at Jeakes House guest house in Mermaid Street when it was owned by Conrad Aitken. She lived at Lamb House between 1967 – 1974 and also at Hartshorn House in Mermaid Street.

Children’s illustrator, Mabel Lucy Attwell, lived in Rye in the 1920’s in a Tudor house opposite the Mermaid Inn called ‘Robin Hill’. It was described in the Beatrix Potter books, Tale of the Faithful Dove, and in the old song “There’s an old fashioned house on an old fashioned street“.

Novelist Radclyffe Hall lied in Rye with her great friend, Lady Una Troubridge between 1928 and 1943. She lived in various houses including Santa Maria in West Street, 8 Watchbell Street, The Forecastle in Hucksteps Row, off 5. Her best known books are the lesbian themed Well of Loneliness and the Sixth Beatitude (about life on Hucksteps Row).

Conrad Aiken, a Pulitzer prize winner, whose guests included TS Eliot and Radclyffe Hall, cherished his home and described the view from his first floor study in Mermaid Street as “a mile of green Romney Marsh and the blue edge of the Channel”. His daughter, Joan Aiken, a famous children’s writer, whose books included The Wolves of Willoughby Chase, was born in Rye in 1924.

Malcom Saville is best known as an author of children’s fiction but he also wrote books about the English countryside. He lived for many years at Chelsea Cottage in Winchelsea. The Malcom Saville Society has regular events to celebrate his work and to explore parts of the countryside that he loved. www.thewitchend.com

Spike Milligan, actor writer and comedian, lived in Dumbwoman’s Lane, Udimore, near Rye. He is buried at St Thomas’s Church, Winchelsea, which has become a pace of pilgrimage for his fans. If you visit the churchyard to see Spike’s gravestone, you may recognise the setting for the Millais painting The Blind Girl (1854) which is set against the background of Strand Hill with St Thomas’s Church on the horizon.

John Ryan, author, illustrator and animator, creator of Captain Pugwash the swashbuckling pirate, lived in Rye near the Ypres Tower (pictured). Lovers of Pugwash may recognise parts of Rye in his famous Pugwash drawings. A retrospective of John Ryan can be seen here

John Howett was a novelist, biographer and writer for film, radio, television and stage. Together with David Sherwin he created If…., One of the key films in British cinema history and based on his experience of private school.  He wrote biographies of James Dean and Frank Sinatra. He was a well loved resident of Rye, known for his strong political beliefs and his love of Europe. He wrote a series of books in his later years which can be purchased from his website www.johnhowlett.co.uk

This year is the 50th anniversary of the festival and to mark it the programme will be packed with literary events, classical and contemporary music, books and talks, theatre and film, walks and tours and other special events. See Rye Arts festival for details.

Make Rye your base and travel a short distance to enjoy houses owned by writers and performers in the past.

From 1916 Charleston was the home and country meeting place for the Bloomsbury Set. Charleston Place and Art Gallery, in Firle, near Lewes, is open to the public and has an annual literary festival. See Charleston House.

Smallhythe Place, near Tenterden, was the home of Victorian actress Ellen Terry from 1899 to 1928.

It contains her fascinating theatrical collection and The Barn Theatre in the grounds has regular productions in the summer. Owned by the National Trust. Check opening times.

The author and doyen of gardening writers, famed for his innovating planting, wrote a string of classic books and 42 years’ worth of regular weekly articles in Country Life. The house and gardens at Great Dixter are open to the public from April to October. See website

Open Monday to Saturday 10.00 am to 4.00 pm.  Information for visitors and residents.  Located at Rye Town Hall. 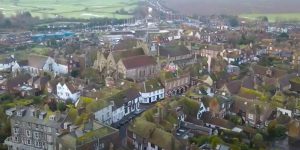 This video by Rye Chamber of Commerce is a glimpse into Rye’s unique history together with a taste of what attracts thousands of visitors every year to this ancient and beautiful town on Britain’s south coast.

A snapshot of Rye