Passing Ashbees 100 on the high street, it is difficult not to stop to look into the window with its quirky and eclectic items. One is tempted by the various artefacts and the paintings by artist Drew, to drop into the shop. Imogen and Justin Smith, from north east London always loved renovating properties and after visiting friends in Rye over a few years decided they wanted to move to Rye. They looked at Ashbees 100 several times but wondered if it was too big a task to take on. However, eventually Imogen and Justin decided to take a leap of faith and moved with their two young girls into the town.

They said the house did not need a lot of changes, the shop some renovations, but it was the old slaughterhouse in the back which intrigued them. Justin has an entrepreneurial streak and likes a challenge, while Imogen has an architectural background and brings the aesthetics to the end product. And thus the slaughterhouse behind the shop has became ‘The Playhouse’, an Airbnb, beautifully restored after a lengthy disruption from the builders making the back garden their home. Imogen was found some space to create a lovely garden for the family and a deck for the visitors. 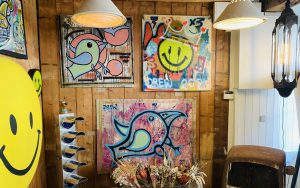 Enjoying life in Rye, being busy with the shop as well as the Playhouse (it is managed by Camber Cottages), Justin could not say no to a new opportunity. He was already displaying the unique and interesting paintings of successful artist Drew. The two agreed that Justin would become the agent for Drew, who usually paints on very large canvases. The art, quirky and full of colour, is now filling the walls of the shop, making a powerful impression as one walks in. If you would like any further information about Ashbees 100 go to the website or phone 07971 989 178.