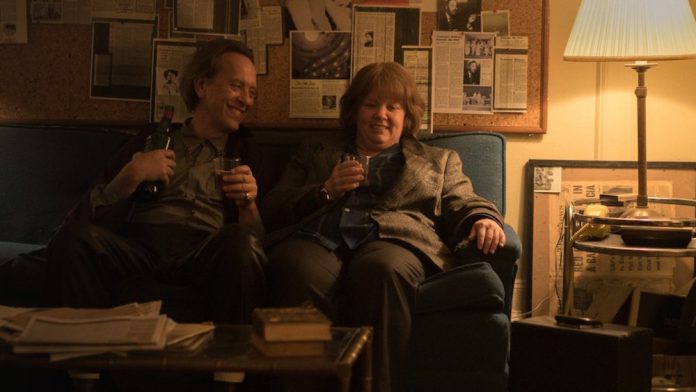 In 1991, following the critical and commercial failure of her biography of Estée Lauder, author Lee Israel, played by Melissa McCarthy, struggles with financial troubles, writer’s block, and alcoholism. With her agent unable to secure her an advance for a new book, Israel sells her possessions to cover expenses, giving a personal letter she received from Katharine Hepburn to book dealer Anna. During all this, she restarts an old friendship with drug dealer Jack Hock, played by Richard E Grant.

While researching a potential Fanny Brice biography, Israel discovers two letters written by Brice, one of which she takes and shows Anna. Anna gives a low offer due to the bland content. Israel returns home and adds a postscript to the second letter before bringing it back to Anna, who takes the letter for $350. Israel then starts forging and selling letters by deceased celebrities, incorporating intimate details to command high prices. Anna, a fan of Israel’s writing, tries to initiate a romantic relationship but is rebuffed.

When one of Israel’s letters raises suspicion for its unguarded discussion of Noël Coward’s sexuality, her buyers start blacklisting her. Unable to sell the forgeries, she has Jack sell the letters on her behalf. She also starts stealing authentic letters from libraries and archives to sell, replacing them with forged duplicates. While Israel is out of town committing one such theft, her cat dies under Jack’s care. She ends their friendship but continues their partnership out of necessity.

The FBI arrests Jack while he is attempting a sale. He cooperates with them, resulting in Israel being served with a court summons. She retains a lawyer, who advises her to show contrition by getting a job, doing community service, and joining Alcoholics Anonymous. In court, Israel admits she enjoyed creating the forgeries and does not regret her actions, but realises that her crimes were not worth it because they did not show her true self as a writer. The judge sentences Israel to five years’ probation and six months’ house arrest.

Sometime later, Israel reconciles with Jack, now dying of AIDS, and receives his permission to write a memoir about their escapades. While passing a bookstore, she sees a Dorothy Parker letter she forged on sale for $1,900. Disgusted, she writes the store owner a sarcastic note in Parker’s voice. Upon receiving Israel’s note and realising that the letter in the storefront window is a fake, the owner removes it from the window but changes his mind and decides to keep it on display.