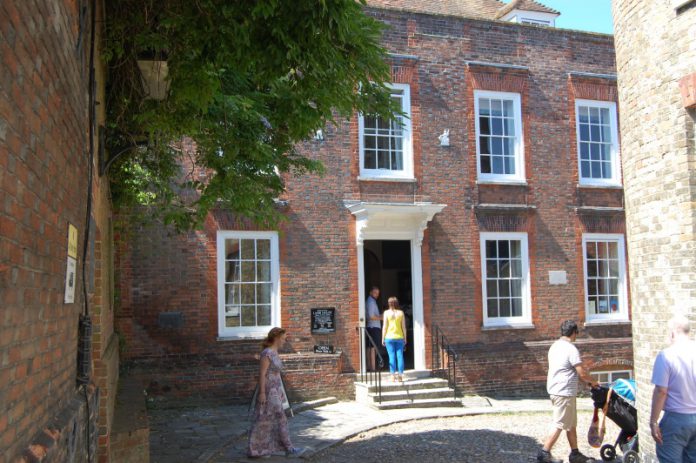 It seems that barely a week goes by without some special event happening at Lamb House, the Georgian National Trust property on West Street. The last event of the season was carols and readings performed by The Lamb Players on December 6, immediately preceded by “A Christmas Fair” in aid of the NSPCC , but these were only the latest of an extensive programme of entertainment that has kept audiences listening, laughing and learning throughout the whole year.

The season usually kicks off with an Easter Egg Hunt in the garden, soon after the House opens after its closed winter season (next year the House will re-open on Saturday March 19). Broadcaster and story teller Richard Crowest has become a favourite, usually doing shows in the summer and at Hallowe’en. It is rather special to sit under the mulberry tree with a glass of prosecco being read a story, typically drawn from the works of EF Benson, Edith Wharton or Saki.

Last August, The Lamb Players put on a well-received production of Twelfth Night. The Company of professional actors was founded six years ago by Francesca Rowan-Plowden, who is the daughter of the current tenants of Lamb House, Patrick and Jacquetta Rogers.

Shakespeare had a second airing later on in the year with an anarchic and chaotic version of Hamlet, put on by Pocket Oxford. The following week saw an equally hilarious cabaret night, hosted by local drag artiste Timberlina. Both of these last two events were made possible by the kind loan of the marquee from the Rye Arts Festival who also hosted all their literary events there.

Rye International Jazz and Blues Festival also used the Lamb House garden as one its main venues over the August Bank Holiday. The acclaimed singer Clare Teal was one of the highlights and her picnic style concert attracted an audience of 250.

The events have helped to raise the profile of Lamb House which also received a boost to its visitor numbers after last Christmas’ BBC Mapp and Lucia television series, which was filmed in Rye in summer 2014. . The house was used for the film and a replica of the Garden Room was built. This was a bay windowed structure that looked out towards the High Street. It was built in 1743, 21 years after the main house, but was destroyed by a bomb during the Second World War.

The Rogers took over the lease of Lamb House two years ago from their daughter Francesca, who moved into the house in 2008 and now lives in Stone.

Next year is the anniversary of Henry James’s death. The American writer lived in Lamb House between 1897 and 1916 and, like Benson, used the Garden Room to write in during the summer months. New exhibits commemorating James’ life and works will be brought into the house and the Trust is expecting an increase in interest in James and his works, especially from American visitors.

The House relies on an army of 35 dedicated volunteers, some of whom have been helping there for more than 25 years. New recruits are always welcome.