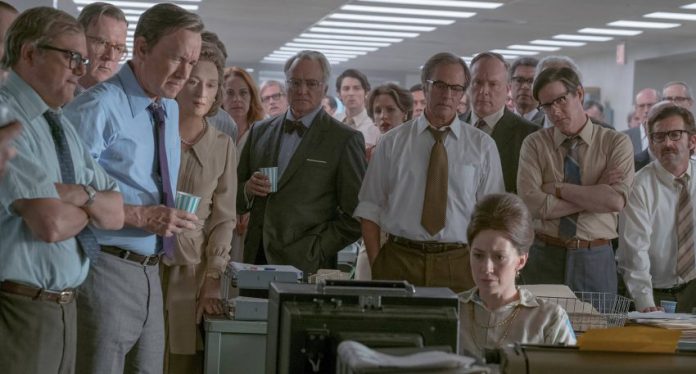 Films showing from Friday January 26 at the Kino, Rye.

The Post[12A] 116 mins
Nominated for 6 Golden Globes including Best Director, Best Actor (Tom Hanks) and Best Actress (Meryl Streep)
Steven Spielberg directs Meryl Streep and Tom Hanks in The Post, a thrilling drama about the unlikely partnership between The Washington Post’s Katharine Graham, the first female publisher of a major American newspaper, and editor Ben Bradlee as they race to catch up with The New York Times to expose a massive cover-up of government secrets that spanned three decades and four US Presidents. The two must overcome their differences as they risk their careers – and their very freedom – to help bring long-buried truths to light.
Three Billboards Outside Ebbing, Missouri [15] 115 mins
Winner of four Golden Globes including Best Film (Drama), Best Actress (Frances McDormand), Best Supporting Actor (Sam Rockwell) and Best Screenplay and nominated for eight BAFTAs including Best Film, Outstanding British Film, Best Actor and Best Director.
A darkly comic drama from Academy Award winner Martin McDonagh (In Bruges). After months have passed without a culprit in her daughter’s murder case, Mildred Hayes makes a bold move, painting three signs leading into her town with a controversial message directed at William Willoughby, the town’s revered chief of police. When his second-in-command, Officer Dixon, an immature mother’s boy with a penchant for violence gets involved, the battle between Mildred and Ebbing’s law enforcement is exacerbated. Starring Frances McDormand, Woody Harrelson, Sam Rockwell, Abbie Cornish, Peter Dinklage and Samara Weaving.
Darkest Hour [PG] 125 mins
Winner of the Best Actor (Drama) Golden Globe for Gary Oldman.
A thrilling and inspiring true story begins at the precipice of World War II as, within days of becoming Prime Minister of Great Britain, Winston Churchill must face one of his most turbulent and defining trials: exploring a negotiated peace treaty with Nazi Germany, or standing firm to fight for the ideals and freedom of a nation. As the unstoppable Nazi forces roll across Western Europe and the threat of invasion is imminent, and with an unprepared public, a sceptical King, and his own party plotting against him, Churchill must withstand his darkest hour, rally a nation, and attempt to change the course of world history. Directed by Joe Wright (Atonement) and starring Gary Oldman, Kristin Scott Thomas, Lily James, Ben Mendelsohn, Stephen Dillane, Samuel West, Ronald Pickup and David Schofield. Forthcoming special events at The Kino

Royal Opera House Live:
Tosca, Wednesday February 7 at 7:15pm, approx 180 minutes, including two intervals
Tosca is one of the great evenings of opera, and from its strident opening chords conjures up a world of political instability and menace. Jonathan Kent’s production for The Royal Opera captures Giacomo Puccini’s dramatic work in this handsome production which throws into relief the ruthlessly taut drama as the tension is wound up towards a fateful conclusion. Starring Adrianne Pieczonka, Joseph Calleja and Gerald Finley, who express their passion in sublime arias, including Vissi d’arte and E lucevan le stelle.
Carmen, Tuesday March 6, 6:45pm approx 200 mins including two intervals
Bizet’s ever-popular opera is given a fresh point of view in Barrie Kosky’s highly physical production, originally created for Frankfurt Opera. The Australian director is one of the world’s most sought-after opera directors and for Carmen he has devised a far-from-traditional version, incorporating music written by Bizet for the score but not usually heard, and giving a new voice to the opera’s endlessly fascinating central character. Conducted by Jakub Hrusa and starring Anna Goryachova, Francesco Meli, Anett Fritsch and Kostas Smoriginas.
Royal Shakespeare Company Live:
Twelfth Night, Wednesday February 14 at 7pm, approx 180 mins including an interval.
Christopher Luscombe returns to direct Shakespeare’s hilarious yet heart-breaking tale of unrequited love. A brilliantly bittersweet account of “the whirligig of time”, with Adrian Edmondson (Bottom, The Young Ones) in the role of Malvolio and Kara Tointon (Mr Selfridge, Sound of Music Live!) in the role of Olivia.
Royal Ballet Live:
The Winter’s Tale, Wednesday February 28, 7:15pm, 180 mins approx with two intervals
Christopher Wheeldon’s The Winter’s Tale is widely judged to be a modern ballet classic. The story follows the destruction of a marriage through consuming jealousy, the abandonment of a child and a seemingly hopeless love. Yet, through remorse and regret the ending is one of forgiveness and reconciliation. With powerful designs by Bob Crowley and atmospheric music by Joby Talbot, this is a masterful modern narrative ballet. Starring Lauren Cuthbertson, Edward Watson, Sarah Lamb, Steven McRae, Laura Morera and Matthew Ball.
National Theatre Live:
Cat On A Hot Tin Roof, Thursday February 22 at 7pm, running time approx 185 mins including an interval.
Tennessee Williams’ 20th-century masterpiece played a strictly limited season in London’s West End in 2017. Following his smash-hit production of A Streetcar Named Desire, Benedict Andrews’ revival stars Sienna Miller alongside Jack O’Connell and Colm Meaney. On a steamy night in Mississippi, a Southern family gathers at its cotton plantation to celebrate Big Daddy’s birthday. The scorching heat is almost as oppressive as the lies they tell. Brick and Maggie dance round the secrets and sexual tensions that threaten to destroy their marriage. With the future of the family at stake, which version of the truth is real – and which will win out?
Kino member free tickets cannot be used for Live, NT, RSC, opera, ballet or special events.
For further information and booking visit Kino Rye or check the quick-view listings page.