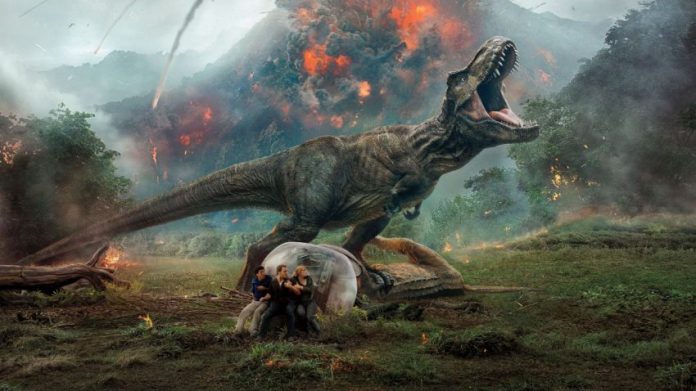 Films showing from Friday June 8 at the Kino, Rye

Jurassic World: Fallen Kingdom (2D) [12A] 128 mins
It’s been three years since Jurassic World was destroyed by the dinosaurs. Isla Nublar now sits abandoned by humans while the surviving dinosaurs fend for themselves in the jungles. When the island’s dormant volcano begins roaring to life, Owen and Claire mount a campaign to rescue the remaining dinosaurs, but encounter terrifying new breeds of gigantic dinosaurs and a conspiracy that threatens the entire planet. Starring Chris Pratt, Bryce Dallas Howard, Toby Jones and Jeff Goldblum.
Book Club [12A] 104 mins
Diane is recently widowed after 40 years of marriage. Vivian enjoys her men with no strings attached. Sharon is still working through a decades-old divorce. Carol’s marriage is in a slump after 35 years. Four lifelong friends’ lives are turned upside down to hilarious ends when their book club tackles the infamous Fifty Shades of Grey. Starring Diane Keaton, Jane Fonda, Mary Steenburgen, Candice Bergen, Don Johnson, Andy Garcia and Richard Dreyfuss.
Life Of The Party [12A] 105 mins
When her husband suddenly dumps her, long-time and dedicated housewife Deanna turns regret into reset by going back to college. Unfortunately, Deanna ends up at the same school as her less-than-thrilled daughter. Plunging headlong into the campus experience, the outspoken new student soon begins a journey of self-discovery while fully embracing all of the fun, freedom and frat boys that she can handle. Starring Melissa McCarthy, Maya Rudolph and Jacki Weaver.
Mary And The Witch’s Flower [U] 103 mins (and Kids’ Club, see below)
From Academy Award nominee Hiromasa Yonebayashi – animator on Studio Ghibli masterpieces Spirited Away and Ponyo – comes a dazzling new adventure about a young girl named Mary, who discovers a flower that grants magical powers, but only for one night. Featuring the voices of Ruby Barnhill and Academy Award winners Kate Winslet and Jim Broadbent.
On Chesil Beach [15] 110 mins
Adapted by Ian McEwan from his bestselling novel, the drama centres on a young couple of drastically different backgrounds in the summer of 1962. Following the pair through their idyllic courtship, newlyweds Edward and Florence, both in their early 20s, spend their honeymoon night preoccupied and terrified by the upcoming consummation of their marriage, leading to an awkward and fateful wedding night. Directed by Dominic Cooke and starring Saoirse Ronan, Billy Howle, Anne-Marie Duff, Adrian Scarborough, Emily Watson and Samuel West.

In the Silver Room Mary And The Witch’s Flower [U] 103 mins
From Academy Award nominee Hiromasa Yonebayashi – animator on Studio Ghibli masterpieces Spirited Away and Ponyo – comes a dazzling new adventure about a young girl named Mary, who discovers a flower that grants magical powers, but only for one night. Featuring the voices of Ruby Barnhill and Academy Award winners Kate Winslet and Jim Broadbent.
This runs for the first film at weekends and at various other times (see quick-view listings page).
Great children’s films for just £8 and for every child ticket bought, an adult goes free. Grab a Kids’ Club loyalty card, have it stamped five times and get your sixth ticket free.
For further information and booking visit Kino Rye or check the quick-view listings page.
For Kino theatre shows and special events see Let’s go to a show!