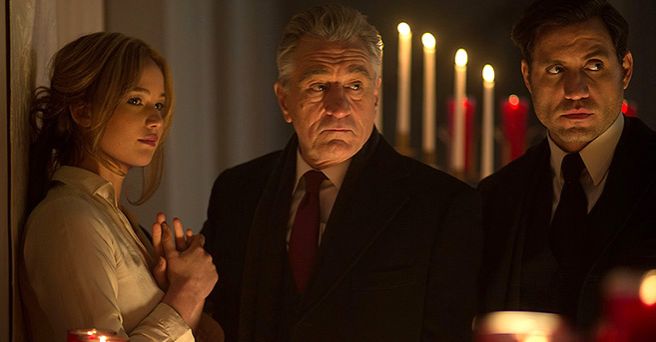 Movies and events coming up at the Rye Kino from Friday January 15 include:

Joy (12A) 124mins  This is the wild story of a family across four generations centered on the girl who becomes a woman who founds a business dynasty and becomes a matriarch in her own right. Betrayal, treachery, the loss of innocence and the scars of love, pave the road in this intense emotional and human comedy about becoming a true boss of family and enterprise facing a world of unforgiving commerce. Allies become adversaries and adversaries become allies, both inside and outside the family, as Joy’s inner life and fierce imagination carry her through the storm she faces. Directed by David O Russell (American Hustle, Silver Linings Playbook) and starring Jennifer Lawrence, Robert De Niro and Bradley Cooper.

Peggy Guggenheim: Art Addict [15] 96 mins   A portrait of a patron of the arts extraordinaire who transformed a modest fortune and impeccable taste into one of the premiere collections of twentieth century art. Directed by Lisa Immordino Vreeland.  “this is an extraordinary story: I was on the edge of my seat”  – The Guardian; “Vreeland tells [Guggenheim’s] story in a lively way, combining gossip, name-dropping and frothier elements with a serious appraisal of her contribution to art history”  The Independent; “hundreds of beautiful images spanning decades of artists, galleries, parties, scenes”  New York Times The Peanuts Movie (2D) [U] 93 mins  Charlie Brown, Snoopy, Lucy, Linus and the rest of the “Peanuts” gang make their big-screen debut, like they’ve never been seen before. Charlie Brown, the world’s most beloved underdog, embarks upon an epic and heroic quest, while his best friend, the lovable beagle Snoopy, takes to the skies to pursue his arch-nemesis, the Red Baron. From the imagination of Charles M Schulz and the creators of the Ice Age films, The Peanuts Movie proves that every underdog has his day. With the voices of Noah Schnapp, Bill Melendez and Hadley Belle Miller.

Rhapsody / The Two Pigeons LIVE: Tuesday January 26 at 7:15pm This delightful Frederick Ashton double bill opens with his setting of Rachmaninoff’s Rhapsody on a Theme of Paganini, using the music’s dark turbulence and brilliance to inspire some of his most thrilling choreography. The second half of the programme features Ashton’s delicate, deceptively comic The Two Pigeons – a work rarely performed and a real treat for ballet fans everywhere. Starring Natalia Osipova, Steven McRae, Lauren Cuthbertson, Vadim Muntagirov, Laura Morera and Ryoichi Hirano.

La Traviata LIVE: Thursday February 4 at 6:45pm  La Traviata is regarded as one of Verdi’s finest operas, and Richard Eyre’s traditional staging, is one of The Royal Opera’s most popular productions. The opera tells the story of the Parisian courtesan Violetta Valéry, one of opera’s greatest heroines, based on the real-life courtesan Marie Duplessis, who died in 1847 aged just 23. Starring Venera Gimadieva, Saimir Pirgu and Luca Salsi.

Film Quiz   Wednesday February 17 at 7:30pm in the Silver Room at Kino Rye.  £6.50 entry per person which includes a light supper prepared by our excellent catering team. Teams of maximum 4 people. The prize for each member of the winning team is a cinema ticket, a main course from our Kino Rye menu and a drink. Booking in advance only – online, by phone or in person. Seats are limited, so book early!