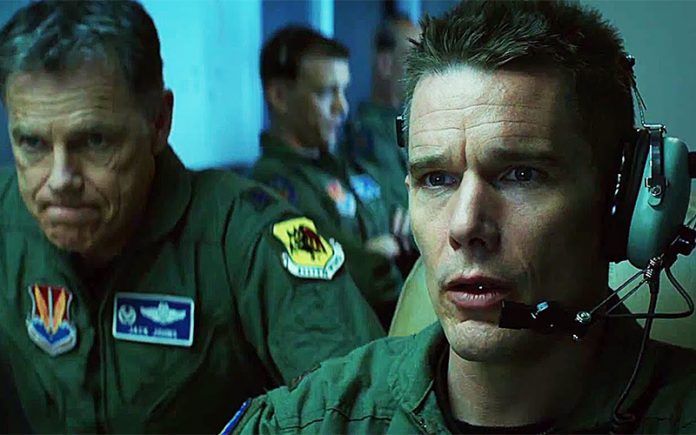 Films showing at Rye Kino from Friday April 24 include:

Good Kill 101 mins [15] The story of a Las Vegas fighter-pilot turned drone-pilot, who fights the Taliban via remote control for half of his day, then goes home to his wife and kids in the suburbs for the other half. But the pilot is starting to question the mission. Is he creating more terrorists than he’s killing? Is he fighting a war without end? One soldier’s tale with epic implications. Starring Ethan Hawke, pictured above and January Jones.

Woman in Gold 109 mins [12A] Helen Mirren stars in the incredible story of Maria Altmann, a Jewish refugee who is forced to flee Vienna during World War II. Decades later, determined to salvage some dignity from her past, Maria has taken on a mission to reclaim a Klimt painting the Nazis stole from her family: the famous portrait of Adele Bloch-Bauer I, her beloved aunt. Partnering with an inexperienced but determined young lawyer, Maria embarks on an epic journey for justice 60 years in the making. Also starring Ryan Reynolds, Daniel Brühl, Katie Holmes, Elizabeth McGovern, Charles Dance, Max Irons and Jonathan Pryce.

A Little Chaos 117 mins [12A]  Sabine is a strong-willed and talented landscape designer who is chosen to build one of the main gardens at King Louis XIV’s palace at Versailles. In her new position of power, she challenges gender and class barriers while also becoming professionally and romantically entangled with the court’s renowned landscape artist André Le Notre. Directed by and starring Alan Rickman with Kate Winslet, Matthias Schoenaerts, Stanley Tucci, Helen McCrory and Jennifer Ehle.

Force Majeure 119 mins [15] Subtitled. This wickedly funny drama tells the story of a model Swedish family skiing in the French Alps. The sun is shining and the slopes are spectacular, but during lunch at a mountainside restaurant, an avalanche suddenly bears down on the happy diners. With people fleeing in all directions and his wife and children in a state of panic, Tomas makes a decision that will shake his marriage to its core and leave him struggling to reclaim his role as family patriarch.

High Tide 94 mins [15]  If all you had was one day before your life changed forever, could you say everything you needed to say? Set in the spectacular Welsh countryside along the Gower coastline, High Tide tells the story of Bethan who has just one day to reclaim, repair and re-embrace her relationship with teenage son Josh. Starring Melanie Walters (Gavin and Stacey) in a career-best performance as well as introducing newcomer Samuel Davies, High Tide is a moving, powerful and tender portrait of a vital twenty-four hours in two people’s lives.

Plus Q&A with both the directors of High Tide on Friday April 24 at Kino Rye at 8.30pm. Don’t miss this chance to ask questions after the screening about the making of this British independent film.

Kids’ Club: Big Hero 6 (2D) 108 mins [PG]  When a devastating event befalls the city of San Fransokyo and catapults Hiro into the midst of danger, he turns to Baymax, a super-sized inflatable robot and his close friends and transforms them into a band of high-tech heroes called Big Hero 6. Disney’s action-packed comedy-adventure is a delight and won an Oscar this year for the Best Animated Feature Film. Kids’ Club tickets cost £6.50 and for every child ticket bought, an adult goes free. Grab a Kids’ Club loyalty card, have it stamped five times and get your sixth ticket free!