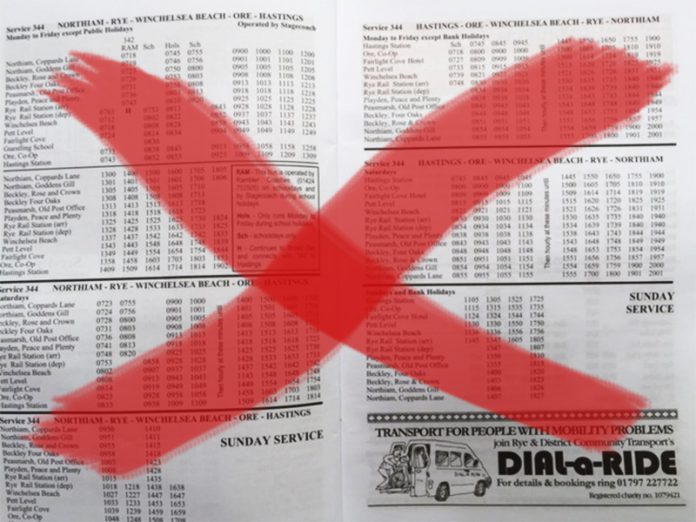 Check before you travel as bus cuts start this Sunday April 26 and there will be no Sunday buses to Northiam or Rye Harbour. This means 12 fewer buses coming into or leaving Rye. On Monday daytime off-peak services to Northiam and Tenterden from Rye will be every two hours, halving previous services. Northiam though has gained a new through-service to Ashford via Tenterden.

The 344 single decker bus between Rye and Hastings via Fairlight becomes a double decker – if the narrow Fairlight road permits and some trees have already been cut back – and will continue from Rye on to Camber and Lydd before joining the existing route through to Folkestone and Dover.

The cuts imposed by the Conservative controlled county council have led to bus company Stagecoach quitting some routes which will now be run by Renown Travel and Rambler. However the Hastings-Tenterden service through Northiam has been extended to Ashford, and Stagecoach claims that Rye will have an improved service overall with more journeys and stops.

The main change is the 344. It is being renumbered the 101 with double deckers on the Hastings-Rye route, provided the Fairlight road proves to be not too much of a problem. Single deckers have been delayed before now by lorries and other traffic on narrow and blind sections of that route. A few more buses should go between Rye and Camber. Philip Norwell,  Stagecoach’s East Sussex managing director,  says “most services have been unaffected”. However Stagecoach has walked away from the routes most affected by cuts (to Northiam, Tenterden and Rye Harbour) leaving new operators to pick up what is left.

Rye Community Transport’s 326 service will look much the same, though some 326 buses run by Stagecoach go. But there will be more RCT buses on Saturdays.

Printed timetables were not to be found this week. There were none in the station booking office and there were no notices midweek on the Rye Station bus stops about the coming changes. That leaves passengers on the spot. They will know of a change, currently, only if a bus doesn’t turn up.

For those with an internet connection, the timetables can be found on the East Sussex County Council website. They’re on their fourth revised version. The timetables will also be in Rye’s Fixtures magazine distributed free to local households from May 1.

Stick to the rules

You are being watched!