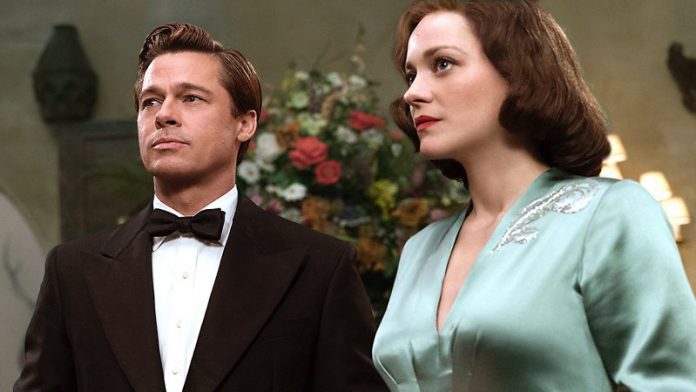 Allied [15] 124mins
The story of intelligence officer Max Vatan, who in 1942 North Africa encounters French Resistance fighter Marianne Beausejour on a deadly mission behind enemy lines. Reunited in London, their relationship is threatened by the extreme pressures of the war. A beautiful love story directed by Robert Zemeckis (Cast Away, Back To The Future), it stars Brad Pitt, Marion Cotillard, Jared Harris and Matthew Goode.

A United Kingdom  [12A] 111 mins
In 1947, at a London dance, there is an immediate spark of attraction when the dashing Seretse Khama, King of Bechuanaland (modern Botswana) meets Ruth Williams, an office worker. Ignoring the opposition of friends and family, they plunge into a whirlwind romance, but reality sets in when Seretse has to return to Africa and their interracial union is opposed by apartheid-riven South Africa, the British Government and Seretse’s own people. The inspiring true story of a love that defeated an empire directed by Amma Asante (Belle), starring David Oyelowo, Rosamund Pike, Jack Davenport and Tom Felton.

Arrival [12A] 116 mins
When mysterious spacecraft touch down across the globe, an elite team led by expert linguist Louise Banks is brought together to investigate. Denis Villeneuve’s incredible and intelligent sci-fi film starring Amy Adams, Jeremy Renner and ForestWhitaker.

Fantastic Beasts And Where To Find Them  2D and 3D [12A] 133 mins
An all-new adventure returning us to the wizarding world created by JK Rowling. Eddie Redmayne stars as magizoologist Newt Scamander who has just completed a global excursion to find and document an extraordinary array of magical creatures. Arriving in 1920s New York for a brief stopover, he might have come and gone without incident… were it not for a No-Maj (American for Muggle) named Jacob, a misplaced magical case, and the escape of some of Newt’s fantastic beasts, which could spell trouble for both the wizarding and No-Maj worlds. Also starring Katherine Waterston, Dan Fogler, Alison Sudol, Ezra Miller, Samantha Morton, Jon Voight, Ron Perlman and Colin Farrell. The BFG 2D [PG] 117 mins Saturday, December 3, at 11am
This fantasy film directed by Steven Spielberg, is based on the 1982 novel by Roald Dahl. The film stars Mark Rylance, Ruby Barnhill, Penelope Wilton, Jemaine Clement, Rebecca Hall, Rafe Spall and Bill Hader. An orphan girl befriends a benevolent giant, dubbed the “Big Friendly Giant”, who takes her to Giant Country where they try to stop man-eating giants invading the human world.

This runs for the first film at weekends. Grab a Kids’ Club loyalty card, have it stamped five times and get your sixth ticket free.

The Nutcracker  ROH LIVE: Thursday, December 8, at 7:15pm. Encore, Tuesday, December 27, at 2:30pm
With Tchaikovsky’s mesmerising score, a Christmas tree that magically grows, a battle between toy soldiers and an army of mice led by the Mouse King, matched with exquisite designs and world-famous melodies, Peter Wright’s enchanting production of The Nutcracker has enthralled audiences for more than 30 years. This year’s festive treat is presented by Darcey Bussell and stars Lauren Cuthbertson, Federico Bonelli, Francesca Hayward and Alexander Campbell.

No Man’s Land  LIVE: Thursday, December 15, at 7pm. Encore, Sunday, December 18, at 8pm
Following their hit run on Broadway, Sir Ian McKellen and Sir Patrick Stewart return to the West End stage in Harold Pinter’s comic classic No Man’s Land, broadcast live to cinemas from Wyndham’s Theatre, London. One summer’s evening, two ageing writers, Hirst and Spooner, meet in a Hampstead pub and continue their drinking into the night at Hirst’s stately house nearby. As the pair become increasingly inebriated, and their stories increasingly unbelievable, the lively conversation soon turns into a revealing power game, further complicated by the return home of two sinister younger men. The broadcast will be followed by an exclusive Q&A with the cast and director Sean Mathias.

Miracle on 34th Street  [U] 1947, 96 mins, Friday, December 2,  at 7pm, doors 6:30pm
Celebrate Christmas early this year with a classic. Winner of three Oscars, it stars Maureen O’Hara and John Payne and with Edmund Gwenn as a kindly old man who claims to be Santa Claus. He is predictably institutionalised as insane until a young lawyer decides to defend him in court. The film also stars a young Natalie Wood.   Love & Friendship [U] 2016, 92 mins, Friday, January 6, 2017, at 7pm, doors 6:30pm
With a story from the pen of Jane Austen, this stylish period drama is based on the novella Lady Susan. It stars Kate Beckinsale as Lady Susan Vernon, a widow, who has come to stay at the estate of her in-laws to wait for rumours of her dalliances, circulating in polite society, to die down. While there she decides to secure husbands for herself and for her reluctant debutante daughter, Frederica.