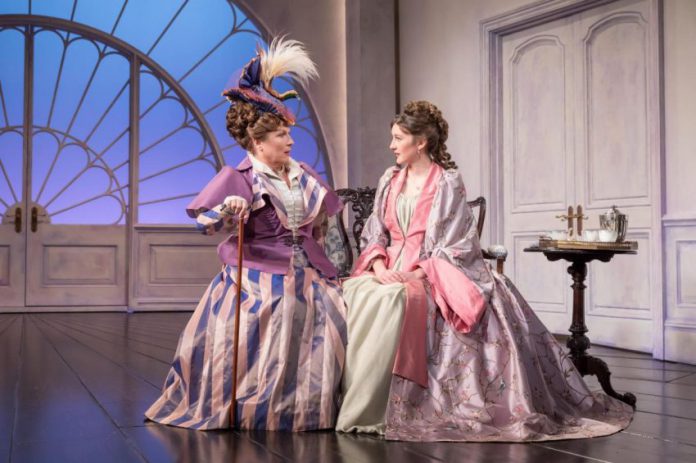 Oscar Wilde Season Encore:
Lady Windermere’s Fan, Thursday April 26 at 7:30pm, running time approximately 165 minutes including an interval
Kathy Burke brings together a talented comedic cast including the Olivier Award-winning actress Samantha Spiro as Mrs Erlynne, Kevin Bishop as Lord Darlington, and guest starring Jennifer Saunders as the Duchess of Berwick, marking her return to the West End stage for the first time in more than 20 years. Lady Windermere’s Fan explores the ambiguity of upper-class morality and the fragile position of women in society in the late Victorian era in one of Wilde’s most popular and witty plays.
Royal Ballet Live:
Manon (2018), Thursday May 3 at 7:15pm. Approximately 155 mins including an interval.
Kenneth MacMillan’s source for Manon was the 18th-century French novel, where he found new sympathy with the capricious Manon and her struggle to escape poverty. But it is Manon and Des Grieux’s impassioned pas de deux – recalling the intensity of MacMillan’s earlier Romeo and Juliet – that drive this tragic story, and make Manon one of MacMillan’s most powerful dramas. Starring Sarah Lamb, Vadim Muntagirov, Ryoichi Hirano, Itziar Mendizabal and Gary Avis.
Swan Lake (2018) 180mins. Tuesday June 12 at 7:15pm. Live from Covent Garden. Tickets on sale now
Swan Lake has had a special role in the repertory of The Royal Ballet since 1934. This Season The Royal Ballet creates a new production with additional choreography by Artist in Residence Liam Scarlett. While remaining faithful to the Petipa-Ivanov text, Scarlett will bring fresh eyes to the staging of this classic ballet, in collaboration with his long-term designer John Macfarlane.
Cast to be announced.
National Theatre Live:
Macbeth, Thursday May 10 at 7pm
The ruined aftermath of a bloody civil war. Ruthlessly fighting to survive, the Macbeths are propelled towards the crown by forces of elemental darkness. Shakespeare’s most intense and terrifying tragedy, directed by Rufus Norris, will see Rory Kinnear and Anne-Marie Duff return to the National Theatre to play Macbeth and Lady Macbeth.
Matthew Bourne’s Cinderella:
Tuesday May 15 at 7pm with live satellite Q&A with Matthew Bourne after the screening. Booking open now; running time approximately 150 minutes including an interval
Matthew Bourne’s Cinderella is a thrilling and evocative love story set in London during the Second World War. The internationally acclaimed choreographer’s interpretation of the classic fairy tale has, at its heart, a true wartime romance. Bourne’s vivid story telling has never been more heart-stopping and touching, and will take the audience into the heart of Prokofiev’s magnificent score. Starring Ashley Shaw, Andrew Monaghan, Michela Meazza, Liam Mower and Alan Vincent.
An American in Paris: The musical
Wednesday May 16 at 8pm. Running time approximately 150 minutes including an interval
With a record-setting 28 five-star reviews from critics, this breathtakingly beautiful Tony Award-winning Broadway musical, inspired by the Oscar winning MGM film, tells the impassioned story of discovering love in the City of Light. Featuring the gorgeous music and lyrics of George and Ira Gershwin (including the classic hits ’S Wonderful and I Got Rhythm), stunning designs and show-stopping choreography.
The Dam Busters at 75: LIVE from the Royal Albert Hall
Thursday May 17 at 7:15pm. Running time approciamately 122 mins including an interval
This year marks the 75th anniversary of the original Dam Busters raid and to mark the anniversary Kino Rye will be screening a special programme live from The Royal Albert Hall.
Dan Snow will be joined on stage by the Glenn Miller Orchestra plus special guests including family members of both Dam Busters’ crew and the film’s director Michael Anderson, historian Paul Beaver and Professor Hugh Hunt as they explore the history of the iconic raid and how it led to the making of a classic British film. Digitally remastered for the occasion, The Dam Busters will be screened following the show.
Oscar Wilde Season Live:
An Ideal Husband, 165mins. Tuesday June 5 at 7:15pm
Live from the Vaudeville Theatre in London’s West End. Tickets on sale now. Running time approximately 165 minutes including an interval
Directed by Jonathan Church, this entertaining and still topical play brings an act of political sin into the heart of the English home. As an ambitious government minister, Sir Robert Chiltern’s smooth ascent to the top seems assured until Mrs Cheveley appears in London with damning proof of his previous financial chicanery.
The talented ensemble cast includes real-life father and son Edward and Freddie Fox; Olivier Award-nominated Frances Barber; Olivier Award-winner Nathaniel Parker; Sally Bretton and Susan Hampshire.
Glyndebourne Live:
Madama Butterfly, 210mins. Thursday June 21 at 6:30pm. Tickets on sale now
Praised by critics as a ‘thoughtful, provocative staging’ and a ‘scathing study of exploitation’, Annilese Miskimmon’s production updates the action to the 1950s. This post-war setting brings to the fore the darker elements of Puccini’s story. Little wonder that this opera has inspired numerous contemporary adaptations and reimaginings, including the hit musical Miss Saigon. Cast includes Olga Busuioc, Elizabeth DeShong, Joshua Guerrero, Michael Sumuel and François Piolino. Featuring the London Philharmonic Orchestra with The Glyndebourne Chorus
Kino member free tickets cannot be used for Live, NT, RSC, opera, ballet or special events.
For further information and booking visit Kino Rye or check the quick-view listings page.