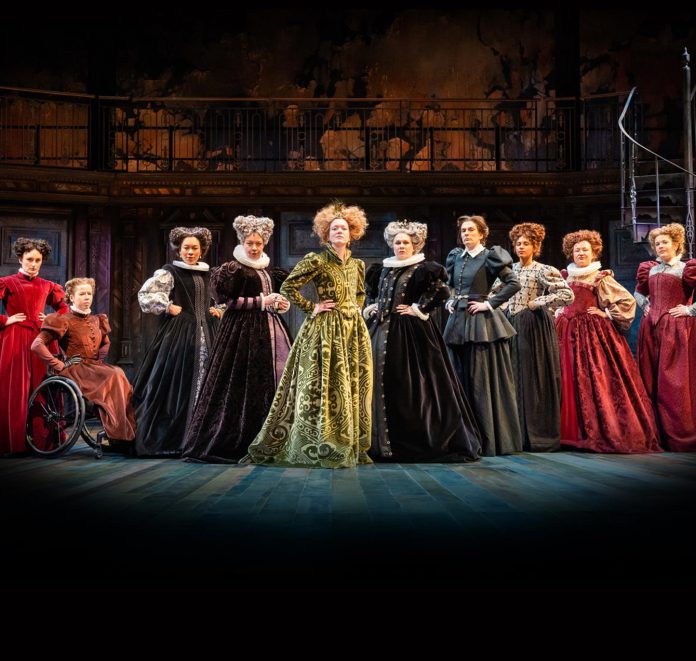 Event cinema at the Kino, Rye, from Friday May 31

Wednesday, June 5 at 7pm, booking now
In a reimagined 1590, England is a matriarchy. Baptista Minola is seeking to sell off her son Katherine to the highest bidder. Cue an explosive battle of the sexes in this electrically charged love story. Justin Audibert turns Shakespeare’s fierce, energetic comedy of gender and materialism on its head to offer a fresh perspective on its portrayal of hierarchy and power.

Thursday, June 6 at 6:30pm, booking now
“I envy the Japanese,” Van Gogh wrote to his brother Theo. In the exhibition on which this film is based – Van Gogh And Japan at the Van Gogh Museum in Amsterdam – one can see why. Though Vincent van Gogh never visited Japan it is the country that had the most profound influence on him and his art. In this little-known story of Van Gogh’s art we see just how important his study of Japan was. The film travels not only to France and the Netherlands but also to Japan to further explore the remarkable heritage that so affected Van Gogh and made him the artist we know today.

Saturday, June 8, 8pm, booking now
Celebrating 30 incredible years, Take That is bringing its spectacular 2019 Greatest Hits tour to cinemas for one night only. Broadcast live on Saturday June 8 from the last UK concert of the tour, this highly anticipated anniversary show promises to be the best yet.

Tuesday, June 11, 7:15pm, booking now; Encore July 1, see below
Shakespeare’s enduring love story is known the world over. Since its 1965 premiere with The Royal Ballet, Kenneth MacMillan’s Romeo and Juliet has become a modern ballet classic. The choreography captures the emotions of the young couple as they fall in love, despite the barriers that finally bring about the story’s tragic end. Each revival gives opportunities for new dancers to interpret the doomed lovers. The whole company brings the colour and action of Renaissance Verona, where a busy market all too quickly bursts into sword fighting, and a family feud leads to tragedy for both the Montagues and Capulets. Starring Yasmine Naghdi as Juliet and Matthew Bourne as Romeo.

Thursday June 20, 8:15pm
This thrilling, audacious and witty production is perhaps still best known for replacing the female corps-de-ballet with a menacing male ensemble, which shattered convention, turned tradition upside down and took the dance world by storm. Retaining the iconic elements of the original staging loved by millions around the world, filmed live at Sadler’s Wells Theatre and starring Will Bozier, Liam Mower and Nicole Kabera.

Thursday June 27, 7:30pm, booking now
Andrea Levy’s Orange Prize-winning novel Small Island comes to life in an epic new theatre adaptation filmed live on stage as part of National Theatre Live’s 10th birthday. Small Island embarks on a journey from Jamaica to Britain, through the Second World War to 1948 – the year the HMT Empire Windrush docked at Tilbury. The play follows three intricately connected stories. Hortense yearns for a new life away from rural Jamaica, Gilbert dreams of becoming a lawyer, and Queenie longs to escape her Lincolnshire roots. Hope and humanity meet stubborn reality as the play traces the tangled history of Jamaica and the UK.

Sunday June 30 at 5:30pm, booking now
A brand new production which takes the classic Cinderella story and put through the lens of composer Massenet’s sensuous and lavish score. Glyndebourne favourite and international star Danielle de Niese plays the title role in this glittering and colourful opera.

Monday July 1 at 7:15pm, booking now
Shakespeare’s enduring love story is known the world over. Since its 1965 premiere with The Royal Ballet, Kenneth MacMillan’s Romeo and Juliet has become a modern ballet classic. The choreography captures the emotions of the young couple as they fall in love, despite the barriers that finally bring about the story’s tragic end. Each revival gives opportunities for new dancers to interpret the doomed lovers. The whole company brings the colour and action of Renaissance Verona, where a busy market all too quickly bursts into sword fighting, and a family feud leads to tragedy for both the Montagues and Capulets. Starring Yasmine Naghdi as Juliet and Matthew Bourne as Romeo.

Thursday July 25 at 7pm, booking from 2pm Friday May 24
The story of a family and a company that changed the world, told in three parts on a single evening. From dreams on a dockside to the spectacular collapse that triggered the largest financial crisis in history, Academy Award-winner Sam Mendes (Skyfall, The Ferryman) directs Simon Russell Beale, Adam Godley and Ben Miles who play the Lehman Brothers, their sons and grandsons.

Sunday July 28 at 2pm, booking from 2pm Friday May 24
Put on your dancing shoes for this year’s fairytale concert. Set against the stunning medieval backdrop of Maastricht’s Vrijhof Square, André Rieu’s hometown concert features the superstar violinist with his 60-piece Johann Strauss Orchestra plus world-class singers, other special guests and over 100 dancers. Known for his festive live performances, this year, he will be performing the music closest to his heart – the waltz, starting with ‘The Blue Danube’.

Wednesday, July 31, 7pm, booking from 2pm Friday May 24
When a young novice nun is compromised by a corrupt official, who offers to save her brother from execution in return for sex, she has no idea where to turn for help. When she threatens to expose him, he tells her that no one would believe her. Shakespeare wrote this play in the early 1600s, yet it remains astonishingly resonant today. Artistic Director, Gregory Doran, directs this new production.

Sunday August 4 at 5:30pm, booking from 2pm Friday May 24
Mozart’s most magical comedy returns to Glyndebourne for the first time in more than a decade. This new production by the renowned directing/design duo Barbe & Douce promises to take a fresh and playful look at the opera’s troublesome gender politics. Leading British bass Brindley Sherratt stars as Sarastro alongside Caroline Wettergreen, Sofia Fomina and Björn Bürger.