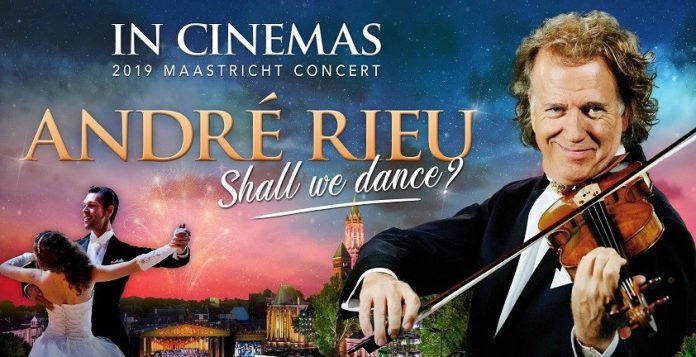 Event cinema at the Kino from Friday July 26

ANDRÉ RIEU CONCERT: SHALL WE DANCE?

Sunday July 28 at 2pm, booking now
Put on your dancing shoes for this year’s fairy tale concert. Set against the stunning medieval backdrop of Maastricht’s Vrijhof Square, André Rieu’s hometown concert features the superstar violinist with his 60-piece Johann Strauss Orchestra plus world-class singers, other special guests and over 100 dancers. Known for his festive live performances, this year, he will be performing the music closest to his heart – the waltz, starting with The Blue Danube.

Wednesday, July 31, 7pm, booking now
When a young novice nun is compromised by a corrupt official, who offers to save her brother from execution in return for sex, she has no idea where to turn for help. When she threatens to expose him, he tells her that no one would believe her. Shakespeare wrote this play in the early 1600s, yet it remains astonishingly resonant today. Artistic Director, Gregory Doran, directs this new production.

Sunday August 4 at 5:30pm, booking now
Mozart’s most magical comedy returns to Glyndebourne for the first time in more than a decade. This new production by the renowned directing/design duo Barbe & Douce promises to take a fresh and playful look at the opera’s troublesome gender politics. Leading British bass Brindley Sherratt stars as Sarastro alongside Caroline Wettergreen, Sofia Fomina and Björn Bürger.

Thursday September 12 at 7:30pm, booking from 2pm, Friday July 26
See the hilarious, award-winning, one-woman show that inspired the BBC’s hit TV series Fleabag, broadcast live to cinemas from London’s West End. Written and performed by Phoebe Waller-Bridge, Fleabag is a rip-roaring look at some sort of woman living her sort of life. Fleabag may seem oversexed, emotionally unfiltered and self-obsessed, but that’s just the tip of the iceberg. With family and friendships under strain and a guinea-pig café struggling to keep afloat, Fleabag suddenly finds herself with nothing to lose.

Fired from his skiffle band, Francis Henshall becomes minder to Roscoe Crabbe, a small-time East End hood, now in Brighton to collect £6,000 from his fiancée’s dad. But Roscoe is really his sister Rachel posing as her own dead brother, who’s been killed by her boyfriend Stanley Stubbers. Holed up at The Cricketers’ Arms, the permanently ravenous Francis spots the chance of an extra meal ticket and takes a second job with one Stanley Stubbers, who is hiding from the police and waiting to be reunited with Rachel. To prevent discovery, Francis must keep his two guvnors apart. Simple.