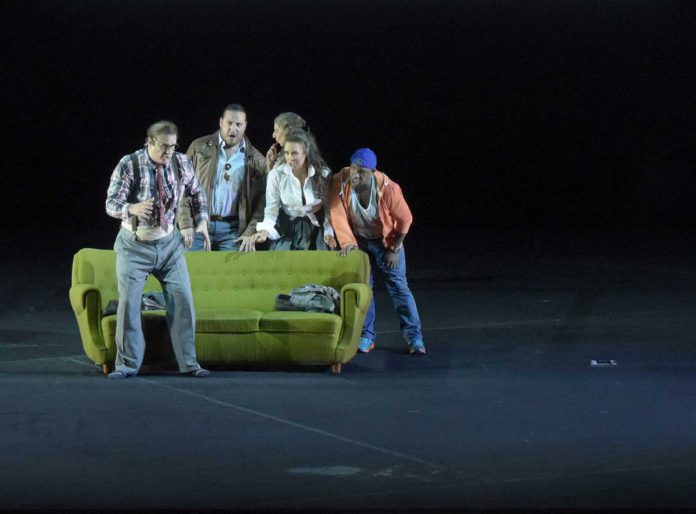 EVENT CINEMA AT THE KINO, RYE, FROM FRIDAY OCTOBER 18

Monday, October 28 at 7pm
Monday November 11 at 7pm
Featuring a Tony Award-winning performance from host of the The Late Late Show, James Corden, the hilarious West End and Broadway hit returns to cinemas to mark National Theatre Live’s 10th birthday.
Fired from his skiffle band, Francis Henshall becomes minder to Roscoe Crabbe, a small-time East End hood, now in Brighton to collect £6,000 from his fiancée’s dad. But Roscoe is really his sister Rachel posing as her own dead brother, who’s been killed by her boyfriend Stanley Stubbers. Holed up at The Cricketers’ Arms, the permanently ravenous Francis spots the chance of an extra meal ticket and takes a second job with one Stanley Stubbers, who is hiding from the police and waiting to be reunited with Rachel. To prevent discovery, Francis must keep his two guvnors apart. Simple.

Monday, November 4 at 8:30pm
Another chance to see this hilarious, award-winning, one-woman show that inspired the BBC’s hit TV series Fleabag, broadcast live to cinemas from London’s West End. Written and performed by Phoebe Waller-Bridge, Fleabag is a rip-roaring look at some sort of woman living her sort of life. Fleabag may seem oversexed, emotionally unfiltered and self-obsessed, but that’s just the tip of the iceberg. With family and friendships under strain and a guinea-pig café struggling to keep afloat, Fleabag suddenly finds herself with nothing to lose.

Thursday, November 7 at 7pm, booking now
Don’t miss this witty and devastating portrait of the governing class, directed by Simon Godwin and starring Olivier Award-winners, Lindsay Duncan and Alex Jennings in this brand new play from Simon Woods, broadcast live from the National Theatre in London. It’s a summer’s morning in 1988 and Tory politician Robin Hesketh has returned home to the idyllic Cotswold house he shares with his wife of 30 years, Diana. But all is not as blissful as it seems. Diana has a stinking hangover, a fox is destroying the garden, and secrets are being dug up all over the place. As the day draws on, what starts as gentle ribbing and the familiar rhythms of marital scrapping quickly turns to blood-sport.

Sunday November 10 at 3pm. Booking now
42nd Street, the legendary Broadway musical theatre classic, tells the story of Peggy Sawyer, a talented young performer with stars in her eyes who gets her big break on Broadway, in the largest ever staging of the Tony Award-winning musical and filmed live at the magnificent Theatre Royal, Drury Lane, in the heart of London’s West End. Directed by the show author, Mark Bramble, this ‘achingly beautiful revival of an American classic’ (★★★★ Telegraph) stars national treasure Bonnie Langford as Dorothy Brock, Tom Lister as Julian Marsh, Clare Halse as Peggy Sawyer and Philip Bertioli as Billy Lawlor, performing with a dazzling tap-dancing and show-stopping ensemble cast.

Thursday November 21 at 8pm
The world premiere of Matthew Bourne’s brand-new dance production of Romeo and Juliet is a passionate and contemporary re-imagining of Shakespeare’s story of forbidden love. Matthew Bourne uses his trademark storytelling style to create a unique interpretation of the classic tale told through dance, performed by a talented ensemble of exceptional young dancers with a specially commissioned orchestration of Prokofiev’s world-famous ballet score.

Thursday November 28 at 7pm, booking now
Matthew Warchus directs Andrew Scott (BBC’s Sherlock, Fleabag) in Noël Coward’s provocative comedy Present Laughter. As he prepares to embark on an overseas tour, star actor Garry Essendine’s colourful life is in danger of spiralling out of control. Engulfed by an escalating identity crisis as his many and various relationships compete for his attention, Garry’s few remaining days at home are a chaotic whirlwind of love, sex, panic and soul-searching. Captured live from The Old Vic in London, Present Laughter is a giddy and surprisingly modern reflection on fame, desire and loneliness.