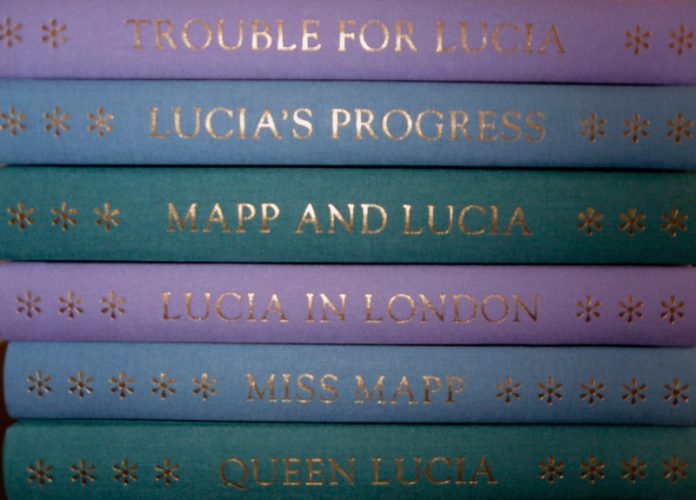 E.F. Benson, or Fred as we like to think of him, first visited Rye in 1900. He says as a guest of Henry James, but this was not true: he invited himself. During the period 1907 to 1919, he did visit Rye and stayed with Lady Maud Warrender, who lived at Leasam (on the hill behind the town).

In the winter of 1916-17 the leaseholder of Lamb House had given the remainder of her lease to George Plank, the famous illustrator and engraver, and Fred, who was a friend, visited Plank at weekends. The following year he had the winter part of the lease held by the painter Robert Norton. In 1919, he and his brother Arthur took the lease and it became Fred’s home.

Although he had his house in London, 25 Brompton Square – the setting for Lucia in London and Secret Lives – he spent most of his time in Rye. By the 1930s, he spent the equivalent of 10 months each year  in Rye and two months in London. When his brother Arthur died in 1925, Henry James’s nephew offered Fred the chance to buy the freehold of Lamb House, but he declined and remained the sole lessee until his death in 1940.

Fred wrote the first of the famous “Tilling” books in 1920 and this was Queen Lucia. This book is set in Riseholme and introduces us not only to Lucia but also Georgie. The name Riseholme comes from the Bishop of Lincoln’s country home (Fred’s father, Edward White Benson, had been chancellor of Lincoln before becoming the first Bishop of Truro). The village may have been based on either Broadway, or Horsted Keynes in Sussex, the family home after his father’s death.

In 1922 he wrote Miss Mapp, which introduced us to Tilling and the main characters of the books set in Tilling. In 1925 he wrote Lucia in London, using the Riseholme characters, and then in 1931 he brought his two formidable heroines together in Mapp and Lucia. Lucia’s Progress and Trouble for Lucia followed in 1935 and 1939 respectively, all three being set in Rye.

In 1934 Fred became Mayor of Rye, much like his heroine, and he served three terms. In his last book, Final Edition, he does mention the Tilling books and says how he thought Rye would provide a good setting for a “fantastic story”. He ends by writing: “It would all be small beer, but one could get a head upon it of jealousies and malignities and devouring inquisitiveness.” I leave others to assess whether these novels are really “small beer”.

I have been asked many times upon whom his characters be based. It is difficult to say, but I suggest there are contenders: Marie Corelli, a popular novelist of the late 19th century, fits many aspects of Lucia – she struggled with the first movement of Beethoven’s Moonlight Sonata among other things. Lady Maud Warrender, who did a lot of good work in Rye and led the fund raising for what is now the memorial hospital, lends many characteristics to Lady Ambermere and also Mrs Wyse.

Georgie has qualities possessed by Fred’s friend Reggie Lister (diplomat son of Lord Ribblesdale) and the Major reflects many of the aspects of two other friends: Francis Yeats-Brown (whom Fred helped as he wrote Bengal Lancer, his most famous book) and Eustace Miles (who established the first vegetarian restaurant in London and whom Fred helped when he and his wife had financial difficulties).

Suffice it to say, when Noel Coward and the writer and socialite Beverley Nichols visited Lamb House and the latter had irritated Fred by persistently asking, “and who is Miss Mapp?”, they received the reply: “I am Miss Mapp.”

Allan Downend is secretary of The E.F. Benson Society