The streets and architecture of Rye are loved by residents and visitors alike and by day, especially at weekends and in the summer, the sight of people taking pictures of its beautiful corners and famous cobbled streets can be seen everywhere – after all, Mermaid Street is purported to be one of the most Instagram-ed streets in the country.

But it is at night, when the streets empty, that Rye’s beauty takes on a new mantle. The emptiness and stillness, illuminated by streetlamps and brightly lit windows and shopfronts, create the feel of a theatre or film set.

Local photographer, Joe Redski, has photographed Rye at night (so avoiding the usual hackneyed images) over the past two years, and presents our familiar streets in a new light, literally, using streetlights, reflected light and shadows to capture the atmosphere and beauty of a town at rest.

He had always been interested in computers and technology and read up and used the internet to teach himself the technical side of taking pictures. Joe chose studio work at first, as he was born with a disability, arthrogryposis multiplex congenita. When he was born, his arms were straight, unable to bend and twisted around but through the help of his mother and  physiotherapy his arms turned. He has had two operations, “The first one to fuse the dominant left arm bent, so that I could bend it high enough to reach my mouth (and hold a camera). The second operation, when I was about 11 years old, lowered that bent arm slightly, so that it didn’t look too eye-catching.” Even so, it is still difficult and painful to hold up the camera and press the shutter. But by using a tripod, a wired or wireless shutter release and touch screen cameras, he can shoot more easily.

From studio work, Joe began to photograph street scenes around Brighton, Hastings and Rye and realised that he preferred to work outside. Using a tripod, he could set up his camera, have time to consider the composition and wait for the right light or the right shot. He now uses a monopod which enables him to take a series of shots more quickly.

The use of light is an important element of his work – both natural and artificial- and he often takes pictures of the same street at different times of day or season.

Explaining his work, Joe said: “Streetlight reflects light onto the surrounding area. This can create interesting highlights on a wall, a door, the pavement, the road, a person. It allows you to creatively compose your night street photography images. You can use a mist filter on your lens, which will create an atmospheric halation around the glow of the streetlamp. You can photograph a person entering the pool of light, surrounded by deep shadows. You can focus on the detail and texture that the streetlamp’s illumination reflects on a wall or a building. If it is misty, streetlamps look extremely atmospheric, especially when they are trailing off into the distance. You can even use the streetlamp itself as the main element of the composition.”

In his photo of Conduit Hill, the heavy shadow, the illuminated details of brickwork and hazy halo around the street lamp create the slightly mysterious atmosphere of a Victorian melodrama. 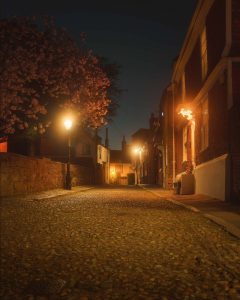 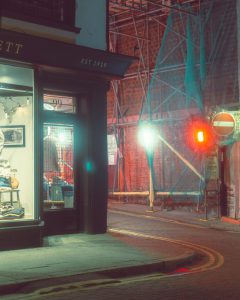 Pinpricks of light give depth to the photo and lights of different colours and brightness give the pictures an almost hyper-real feel.

In the Mint, the light from the shop window is reflected onto the faces of the couple looking in and falls on the pavement, reminiscent of Edward Hopper’s painting Nighthawks.

On his nightly wanderings, Joe photographs things that he thinks other people may not see. In the Lamb House photograph, the sky at dusk has still a hint of blue but the streetlamp in the corner of Lamb House creates silhouettes and shadow, a slightly surreal composition that reminds one of Magritte’s The Empire of Light.

As well as street scenes, Joe has photographed the landscapes surrounding the town and as ever, light plays an important part.

As an added string to his bow, Joe uses his skills to photograph business, charity and family events.

He said: “I like to photograph events with a documentary, street style, and candid ethos. This means that shoots are mostly unplanned, and I am a fly on the wall. I strive to capture those special emotional moments that are fleeting and generally missed. The smiles, the contact and the personality, are the elements that I am observing and photographing when I am shooting an event.”

He is offering workshops on how to photograph during the day and at night, both in and around Rye.

For further examples of Joe’s work, to purchase prints or his e-zine Rye at Night see his website.