Looking up from her lifestyle magazine DeDe murmured “Not a day goes by without reading something about doodles in distress. If it’s not about some furless two legs being mean, it’s about another unable to afford to care for their doodle any longer”.

Although pretending to be dozing Lily-Poo heard DeDe and without realising it answered, “You’re right DeDe it’s terrible how some doodles have to live. I know we have times when our ‘home-service’ is not up to standard, but these doodles have it far worse, some don’t even have a home”. DeDe sighed and continued reading while Lily-Poo returned to her nap.

All was peaceful until Phoebe, Dante and Harley bounced over with large pieces of Winton’s liver cake. It was lovely to see them, especially as they had liver cake, but the girls had been enjoying their solitude and a few moments longer would have been nice.

With her mouth full of cake, Phoebe peered down at DeDe and asked what she was reading. Before DeDe could clear her throat Lily-Poo jumped in and said, “She’s reading about unhappy doodles that don’t have homes”.

The concept of an unloving home wasn’t something Phoebe ever thought about. She was one of the lucky ones with a comfy bed, regular meals and a furless two legs always on hand to turn the telly on in time for her favourite programme.

DeDe tried to answer Phoebe but Lily-Poo butted-in again, ‘There are so many doodles who start life in the wrong homes and then get handed into rescue shelters when the furless two legs don’t want them anymore. There’s a rescue shelter on my way to the beach and I always feel sad when we drive by’.

Harley, who normally never talks while he’s enjoying Winton’s liver cake, asked ’Do you know if we can help the doodles there?’

“I don’t know” said Lily-Poo, “but I am sure they always need food, toys and treats don’t you?” Lily-Poo went on, “The doodle who lives next door to me came from there, we’re always chatting over the garden fence, so I’ll ask if he knows what they need”.

That evening, just as DeDe was settling down for bed, she saw a positive thought from Lily-Poo saying she’d spoken to her doodle neighbour, Winston, and he’d told her the rescue shelter was in desperate need of anything and everything. He’d heard from his friend Duncan, who was still living there, that they were facing ‘a crisis’ with so many doodles and not enough room to look after them. DeDe felt sad and decided not to answer until the morning. She needed time to think about how best to reply. The homeless doodles situation is very worrying and needed her reflection time.

Next morning DeDe was so caught up in her routine that she didn’t think about the rescue shelter until they were on their way to the beach. As Billy pulled out of the station Phoebe reminded her by saying she’d been so upset about the homeless doodles she’d not slept a wink all night. 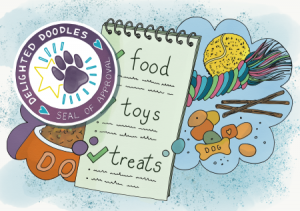 The beach was covered in mist and soon it started to drizzle. The mixture of wet air and soggy sand made doodle dashing less fun so they decided to pop over to the café. Luckily nobody was sitting at their favourite table so they grabbed it before ordering. They all chose bacon rolls except Harley who preferred his usual toast and marmalade. They were quiet while they waited for their food, none of them wanting to start a conversation about what was on their minds, the doodles in distress.

The first to speak up was Dante, who until now had not voiced any opinion. This was unusual because he’s normally quick to speak up. “From what Lily-Poo’s neighbour Winston has told us, there’s a crisis at the Doodle Rescue and we need to help.”

“Perhaps we could arrange some sort of ‘happening’ on the beach and the furless two legs could raise lots of money for everything the rescue shelter needs?”  said Lily-Poo.

“You are you right, Harley, it is called fundraising and it’s our job to put the FUN into fundraising” said Lily-Poo.

“We could have an agility course and lots of ball games on the beach. We could even ask one of the stars from Lily-Poo’s favourite soap opera to make a guest appearance” added Phoebe

Dante didn’t reply but thought it strange everyone wanted to meet actors who play characters that were always arguing with their families. Surely they’d prefer to see the weather man or that nice lady from the cooking programme?

It didn’t take long before they had planned a one-day summer fun day packed full of activities that would help the Doodle shelter. They could picture it now, there would be a famous person asked to say a few words before the official opening. There would be races, games and, of course, lots of doodle treat stalls. They would make sure the lovely people from Winton’s liver cake had the biggest stall of all.

We won’t bore you dear readers with the details of how the doodles and furless two legs worked hard to prepare for the day, only to say everyone did their bit and it wasn’t long before everything was arranged and ready.

The doodles decided to have a sleep-over the night before the big day so that they’d be on hand for any last minute hiccups. After supper they tried on their specially designed “HELP DESPERATE DOODLES” t-shirts just to be sure they fitted. They lined up in front of the mirror and gave out a loud cheer when they saw how smart they looked.

The moment it was light they caught the first Billy train to Camber: as they rushed over the dunes they could feel the beach was ready for a very special day. To their surprise there were already lots of furless two legs working hard setting up the treat stalls and marking out the agility course. There wasn’t much they could do so they dashed into the dunes to play.

As they dashed through the clumps of grasses they began to hear singing. They followed the sounds until they found Jangles wearing a ‘I ❤️ Ibiza’ white trilby, along with the Doodlettes dressed in multi-coloured grass skirts. After much dancing and helicopter tail wagging Jangles told them he and the Doodlettes were ‘the music’ for the day. They were all certain the Doodlettes’s cover tunes would make everyone very happy and even more generous.

While they were chatting the sound of clapping rose from the beach. Looking down they caught sight of a familiar furless two legs gliding along the beach in a bright pink trouser suit topped with the biggest straw sun hat they’d ever seen. The sight of such elegance took DeDe’s breath away, she was in awe of how effortlessly the lady glided over the sand and how regally she waved at everyone.

“I think she’s a  singer” said Harley, “the one who sings the songs my dad likes”.

“I think you’re all wrong”, said DeDe, “I’m sure she’s the lady who tells us which creams keep the wrinkles away”.

It was too special a day to argue so they quickly agreed to disagree. Whoever she was, she was certainly famous and the perfect choice to open the fun day. It wasn’t every day you saw ‘celebs’ on the beach at Camber, and if she had done nothing else, she had convinced DeDe and Lily-Poo they needed to add an enormous floral sun hat to their summer wardrobes.

As the clapping died down, the famous lady started to say a few words, in fact she said so many words the doodles dozed off. Harley was sure he heard, ’please give generously’ and Phoebe shed a tear when she heard ‘please help our darling doodles’. The crowd let out a warm cheer when she announced Jangles and Doodlettes Lily, Nellie and Bella would be performing.

Once the speeches were over Jangles tapped the microphone and nodded to the Doodlettes who gently started their routine for the first number. Softly they began to sway and sounds of ’do-waa-waa-do-waa-waa-do’ curled through the air as Jangles sang ‘I’m picking up good vibrations’.

Harley and Dante got competitive on the agility course until they were too exhausted to do another lap, finally conceding they were as good as each other. Lily-Poo, Phoebe and DeDe lost count of how many pieces of Winton’s liver cake they ate, agreeing it was the best they’d ever tasted.

As the warmth of the sun died down the crowds began to leave. Soon the beach was back to normal and all evidence of the fun day had disappeared. On the train home Phoebe was sure she heard a furless two legs say, ‘loads of money’ and ‘what a success’, which made her feel so warm inside she fell asleep.

This should be where our story ends, but for what happened in the café a few days later. While snoozing on the decking they saw a doodle they didn’t recognise. Dante walked towards the handsome golden doodle who introduced himself saying, ’Hello, I’m Duncan and I’m new around here. Until recently I’d spent ages living in a rescue centre, but yesterday I found my forever home in Camber’.