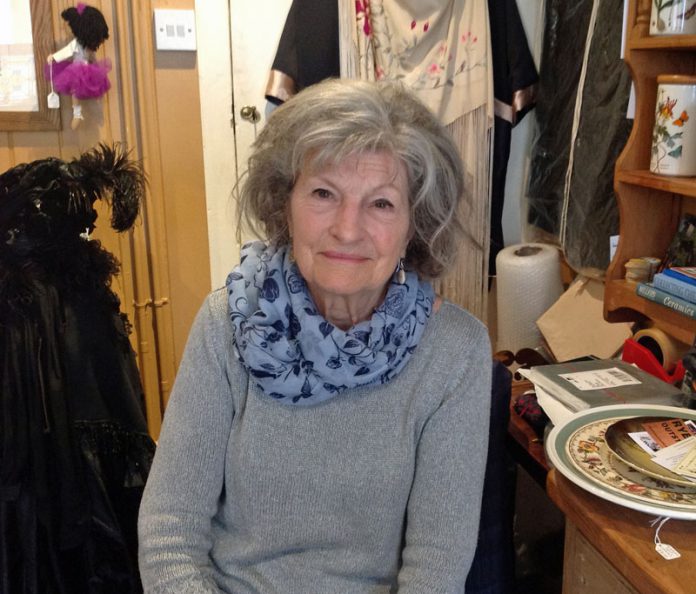 Before interviewing Dilys Mayor for the Ryers Unwrapped series, I put her name in Google and the results summarised perfectly the energetic, vital person she is and demonstrated how her many talents have made a real contribution to Rye over the last 30 years.

She writes, directs, acts, volunteers, and runs a shop, as well as working part time. She has even appeared in an article in The Guardian commenting on Rother being the most female place in England and Wales.

Asked how and when she came to Rye, she says, with her usual humour, “I stumbled upon Rye in 1976 after being invited to a wedding in Worthing. I was looking for somewhere to stay and on the map Rye looked close to Worthing so I booked a B & B at Rye Harbour. Of course it was miles away but it was a perfect June day and I fell in love with the place.”

Her husband had died in 1976 and, after her children had grown up, she had moved from Essex to Kingston-on-Thames, but hadn’t really settled there, so she sold up and made a fresh start in Rye.

For three years she commuted daily to her job in an advertising agency in London until “one very early morning as I left Rye and saw the sun beginning to shine over the marshes, I just thought I don’t want to do this anymore and decided to to look for work in Rye.” For the next few years she worked as a freelance copywriter in the day and in Monrow’s bistro in the evenings. At this time she had also opened her first shop in Ferry Road, but this was blighted by the building of Station Approach and the supermarket.

In 1994 when Phillips and Stubbs moved from what is now “Edith’s House” in the High Street to their premises in Cinque Ports Street she joined the company as their “Sunday lady”. Gradually more days were added and she spent two years in charge of their branch at Appledore but now, after 21 years, she is back to just working on Sundays. She loves looking at and selling houses (and is very good at it – sold my house to me in 2002 by saying all the right things and with great charm). Dilys was born into a family who loved reading and theatre and was lucky enough to go to a school which encouraged and taught all aspects of drama. She has been actively involved as a writer, director and actor in The Rye Shakespeare Company which was founded in 1990 to perform outdoor drama as part of Rye’s annual Medieval Festival, and is best known for “The Secret History of Rye” – outrageous comedies concerning the adventures of famous historical characters in Rye (whether or not they actually came here).

Her theatrical work has included Rye Players, the recently formed Acting up in Rye and, for EF Benson fans, she led the Tilling Dramatic & Operatic Society in their centenary performance. Her family have inherited Dily’s love of drama and her daughter Susannah is House Steward of Smallhythe Place, now owned by the National Trust but once the home of the late Dame Ellen Terry, acclaimed as Britain’s leading Shakespearean actress.

Regular exhibitions and productions are held in the intimate Barn Theatre, created by Ellen’s daughter Edith Craig, while Shakespeare’s plays are performed out of doors. Actress Susannah Mayor,  perhaps best known as an incomparable Lucia in a variety of performances from EF Benson’s Mapp and Lucia stories, recently gave a Dame Ellen Terry evening at the Rye Museum where Dilys has worked as a volunteer since the late 90s.  Her son Andrew also writes plays and he too is involved with the Players.

The Rye Museum in East Street – once a bottling plant and off-licence depot – runs monthly talks and events as well as housing examples of Rye’s rich history. The other half of the Museum is the actual Castle, known locally as the Ypres Tower. It is open all year round and Dilys’s eldest son Toby is one of the Guides; East Street however closes from the end of October till March and is run entirely by volunteers as there are no funds or grants to employ staff.  Dilys draws up a rota of volunteers and would love to add to her list more helpers to work in the Museum.  “Even if people can only offer half a day a month it would make a difference to us”.  She can be contacted at dilys.mayor@gmail.com

Dilys lives behind her shop “Harlequin” in East Street which she bought in 1996 and although it needed  a lot of work she instantly warmed to the atmosphere and made an offer straight away. The shop reflects her creative flair.  It is full of costumes, hats, First Folio Shakespeare cards, Mapp and Lucia books plus a n eclectic mix of vintage china, textiles and trims . Each item is well displayed and has its own story. “I’d like to have just a vintage shop but this is a bit of everything I’ve collected over the years and I can’t keep it all”.

The shop was a butcher’s for hundreds of years, up till 1935. Various trades followed but it was a corset shop when it closed in 1970. “Mrs Worth who ran the Jaeger shop opposite for 45 years, told me that her ladies visited the corsetiere first and then crossed the road to her for their outfits”.

Commenting on Rye now she says, “shops like Woolworth’s and Ashbee’s have been a great loss to the town and it is sad that many locals now choose to go out of Rye for their shopping.  But Rye reinvents itself time and again and it will keep doing that.  I love it and I feel so at home here.”  I’m sure Ryers are glad that she does and appreciate the energy and creativity she brings to the town.  You will find her shop Harlequin next door to the Apothecary in East Street.