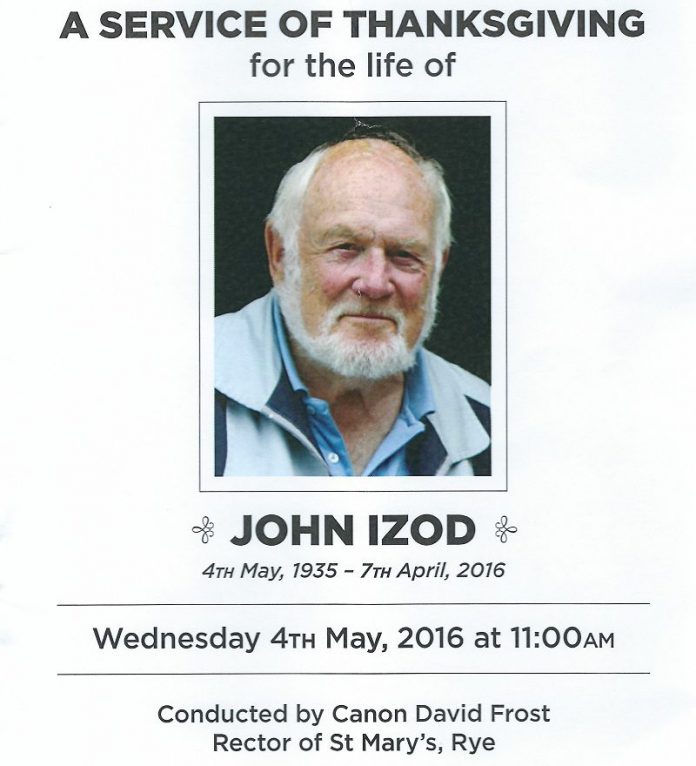 St Mary’s church had all seats filled for the service of thanksgiving for the life of John Izod yesterday, writes Kenneth Bird. Recollections and personal reflections were offered by members of John’s family, by Ian Potter and by Canon David Frost, who conducted the service. John was rightly the star of the show, seen as a young man in military uniform on the back cover of the programme sheet, with his drawing and cartoons of Rye liberally sprinkled inside – a collector’s item.

With the singing of Jerusalem, and I vow to thee my country, we caught something of his English gentleman’s nature, but all else was mischief, his love of jazz and good company, and his sense of fun. His Canadian son Max recalled a visit on one bonfire night watching the procession of dark figures carrying burning torches; John whispered in his ear: “this is the nearest you’ll get to the Ku Klux Klan”.

John’s multi-faceted talents as artist, actor, and raconteur, often with pint in hand, were recalled with affection. So too was his contribution to the town of Rye that he came to love. He was deeply involved in community affairs, serving on the town council and many voluntary organisation committees. These included first and foremost perhaps the Rye Bonfire Society, but also at various times the Rye Arts Festival, Rye & District Community Transport and the Rye Chernobyl Children’s committee. He was a founder member of the Rye Film Club and Rye News. Wherever his interest lay, he matched this with a real commitment, and still found time for his painting and cartoons.

Fittingly, the service ended with selection of John’s favourite jazz, played on the organ by Phil Law. The company then joined the procession from the church to The George, where the reception was held.

The service began with a procession down the aisle of the Town Council in full robes and regalia including the two magnificent gilded maces. Jonathan Breeds on one of his first ceremonial duties as mayor led the councillors accompanied by the town clerk in his wig.

The town council were not the only grand sight in the church as just behind them sat the representatives of the Rye Bonfire Society in their no less splendid red coats and regalia.

We heard first from Andrew Izod – John’s youngest brother-who said how much he looked up to his older brother and suggested we look at the photograph of John as a young soldier on the back of our service sheets which were also illustrated by some of John’s drawings. Andrew read the familiar verses about “Charity” from St Paul’s letter to Corinthians as his tribute to John and they seemed somehow very appropriate to John’s life.