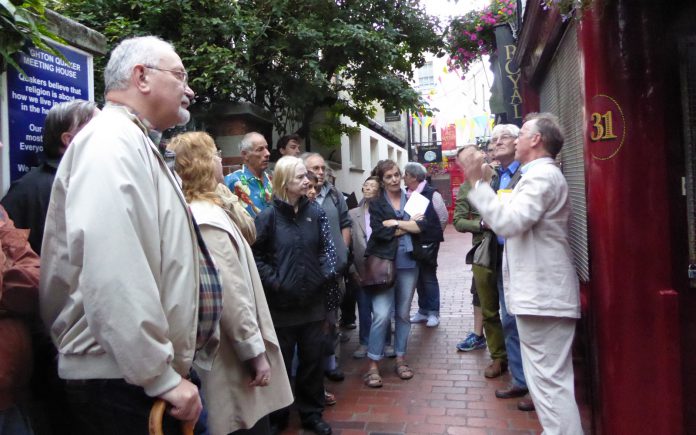 Geoffrey Mead, of the University of Sussex School of Global Studies is a geographer and expert local historian who now also trains South Downs National Park volunteer rangers, does walking tours and presents on BBC Radio 4. He is also a Rye Museum Trustee.

The Journey to the South Downs National Park was a very long one, lasting many decades, but one recounted so enthusiastically by our speaker in his talk at the Rye Museum last Thursday May 9, that we listeners remained eager throughout for the next leap in the tale.

The evening’s journey was wonderfully illustrated throughout – photos, artwork, maps, book covers and posters. What might be called the last chapter of the story began with plans discussed in 1947 for designating the South Downs as a National Park but it took more than 50 years (2009) for it to become one, the country’s 10th, officially designated as such a year later.

The park, which covers 627 square miles across Sussex and Hampshire, woodland, heathland, downlands and the white chalk cliffs of Beachy Head and the Seven Sisters, has been called ‘the jewel in the crown of Sussex’ and has the highest level of landscape protection anywhere in the UK so that it can be kept ‘special’. But to appreciate the achievement the current status represents needs a much longer story. After all, there are still residents whose families have lived and farmed on the South Downs for centuries.

Changing attitudes to the countryside was a major theme of the talk, beginning with the fact that the UK was the world’s first urban nation i.e. the first where more people lived in cities than in the countryside. Stories of urban poverty are perhaps better known than the fact that rural areas were often worse and appreciation of landscapes developed slowly.

Writers such as Defoe (in 1724) referred to unpopulated areas as ‘bare’, ‘wild’ and ‘of no use’, they were generally considered inhospitable, unattractive and unproductive. And early photographs reveal that houses weren’t built facing the sea, looked upon as a threat.

Attitudes began to change in the 19th century – think Wordsworth, Grand Tours and romantic ruins. In the 1840s came railways, and for some, leisure time and money, so tourism began to develop –meaning for the area south of London hotels and tea gardens and offers of excursions by donkey to attract Londoners.

However the transition to today’s National Park – and the 100-mile-long South Downs Way which spans the entire length of the Park – was not smooth. There was a time when thousands of acres here were devoted to sheep farming and wheat growing. But In America labour shortages inspired inventions to compensate and railways began to spread, enabling efficiencies which damaged the UK’s grain market because it could not compete. Something similar happened with sheep and New Zealand. Land was abandoned and land values reached rock bottom. Life in towns seemed preferable to rural poverty in shacks and shanties. Developers took advantage of the exodus.

The focus of the story now shifted to the far-sighted individuals who saw the dangers of industrialisation and the unregulated changes to the countryside including some – like concrete roads – made by military activities during the World Wars. Organisations were formed – the National Trust and RSPB were two of them – and in 1926 22 such groups joined together to form The Campaign for the Preservation of Rural England to stop the spread of ribbon development and make the case for protecting areas of beautiful countryside and for setting up green belts. Ordnance Survey mapping of English countries was progressing too. There has been much for individuals and groups to campaign about over the past 93 years.

We learned of some of the champions publishing in the early 1900s. One was Cecil James Sharp, best known for stimulating the great revival of interest in folk songs and legends. Another was SPB Mais. prolific author, broadcaster, teacher, walks guide and train excursion organiser, known as the ‘Ambassador of the Countryside’. His more than 200 books included a popular guidebook, Southern Rambles for Londoners, produced by Southern Railways, illustrated by Audrey Weber and calling readers to rediscover the delights of the English countryside.

A third man of vision was architect Sir Bertram Clough Williams-Ellis whose England and the Octopus (1928) predicted the wrecking of the countryside to come in the next years and sparked calls to save it. And a fourth was the philosopher C E Joad who crusaded to preserve the English countryside against industrial exploitation, ribbon development overhead cables and destructive tourism.

Thus persuaded, people became keen on tramping around the countryside, starting walking and cycling clubs, listening for bees in the heather and admiring views of the English Channel. In the early days, we heard, some potential walkers needed advice e.g. not to wear suede shoes or silk stockings for country walks.

For those who would like to know more about the ‘journey’ to the South Downs National Park (or who were prevented from getting to the talk by the terrible weather), Geoffrey also recommends 22 Ideas That Saved The English Countryside. This is a new book written by Peter Waine, former CPRE chairman, and Oliver Hilliam, senior communications and information officer at CPRE.

It was another memorably informative evening at Rye’s Museum.