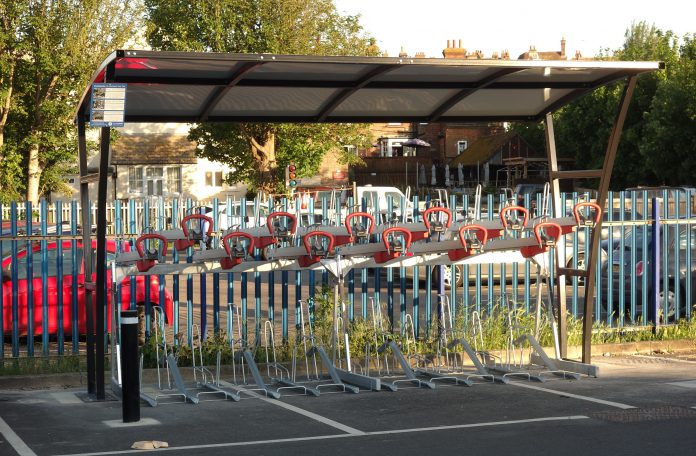 Sunny weather for the late Spring Bank Holiday brought many visitors by train to Rye (unlike the previous early May holiday when a bus replacement operated) and, even with the current 4-carriage service, some trains were operating 80-90% full. Unfortunately, engineering works and replacement buses will be returning to our line, perhaps as early as the weekend of 19 June.

Meantime, Southern have been installing more of the upgrades for Rye station planned under GTR’s Passenger Benefit Fund (“PBF”) initiative. The PBF scheme is an initiative intended to provide some reparation to passengers for the disruption across the network caused by the new GTR timetable of several years ago although the Marshlink itself did not suffer severe disruption.

Nonetheless, improvements were allocated to most Southern stations on the network and Rye was allocated £30,000. It is a requirement of the scheme that funds were available only for station infrastructure and facilities, rather than the cost of analysing projects beyond the scope of a station’s allocation of funds or train operation.

Several stakeholders contributed to the plans for Rye station, including Rye Town Council, the Community Rail Partnership and MLAG: MLAG interviewed passengers to seek their suggestions. Some improvements that MLAG wished to see (such as reinstating the toilet facility on the Down platform or additional access for the Up platform) proved unfeasible, for technical reasons, but some useful measures were approved by the trustees of the PBF.

First to appear was the marking out of a walkway through the station car park to Rope Walk to better indicate the step-free access to the up platform and to provide a greater sense of security from traffic by creating a designated pedestrian route for passengers. This access route via the car park and level crossing is, of course, familiar to Rye residents, but not at all obvious to visitors. Additional signage for it will be added on the platforms in due course.

More recently, the two hoops for securing bicycles in front of the station were replaced by five newer ones. And a twin-level cycle rack has now been added in the car park with space for 24 bikes and located close to CCTV cameras. MLAG hopes that this new amenity will help promote the integration of rail with other forms of transport and Nick Hanna, founder of Sussex Greenways, commented:

“These new racks are great news for encouraging a modal shift towards cycling. Rother District Council has recently published an excellent report on cycle parking in the district which highlights the urgent need for more good quality cycle infrastructure such as this in order to encourage residents and visitors alike to cycle more.”

Further improvements still to come at Rye include a canopy for the ticket machine and an additional information display screen by the side gate access.