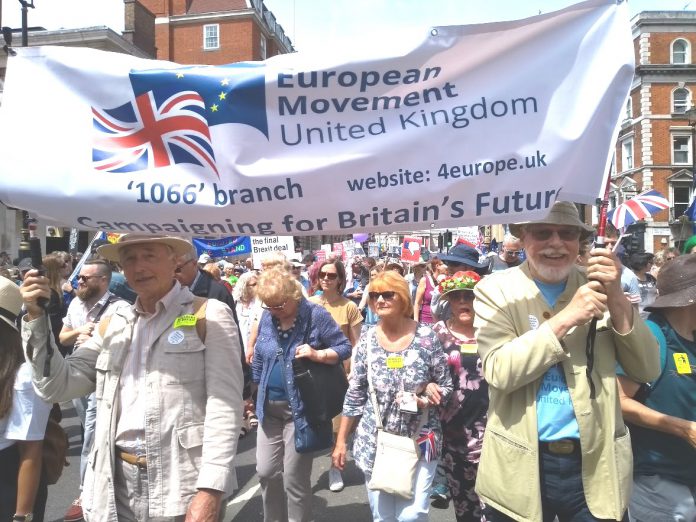 Dozens of campaigners from the Hastings and Rye and Battle and Bexhill Constituencies joined over 100,000 others in London for largest ever pro-European march
Members of the European Movement 1066 branch travelled to London on Saturday June 23 for the biggest pro-European march ever, as more than 100,000 people filled the streets around parliament demanding a “People’s Vote” on the final Brexit deal.
Ben Patterson, spokesperson for the European Movement 1066 branch said:
“It was an amazing day out but the huge numbers shows the strength of feeling. The People’s Vote campaign is taking off across the country on this vital issue for all our futures.
“In the 1066 branch we have seen our membership increase in recent months as it has become clear the government is intent on a bad Brexit deal that will destroy jobs, harm our NHS and wreck the future of young people”.
“Whether you were a leaver or a remainer two years ago, this government is making a complete mess of negotiating Brexit. Instead of fighting among themselves they should be working to put a good deal to the voters. They claimed they were up to the job, but less than nine months away from exit they haven’t come up with anything worth looking at.
“There is so much that we weren’t told at the time of the referendum, we weren’t told about –  the £40 billion divorce bill back or that promises on extra money for the NHS would be broken. We weren’t told that companies like Airbus and BMW would have to cut jobs, we weren’t told that 75,000 jobs in the City could go if there is no deal. We weren’t told that taxes would have to go up to pay for the NHS because the Brexit dividend won’t arrive. Land Rover are moving production abroad and even Jacob Rees-Mogg has shifted his company to Eire in anticipation of a bad deal.”
“Here in the Hastings and Rye and Battle and Bexhill Constituencies we will be out campaigning all summer to make sure the people get their democratic right to have their voice heard on Brexit. Our constituency MPs need to be held to account for the current shambles and that is what the Peoples Vote campaign is all about”