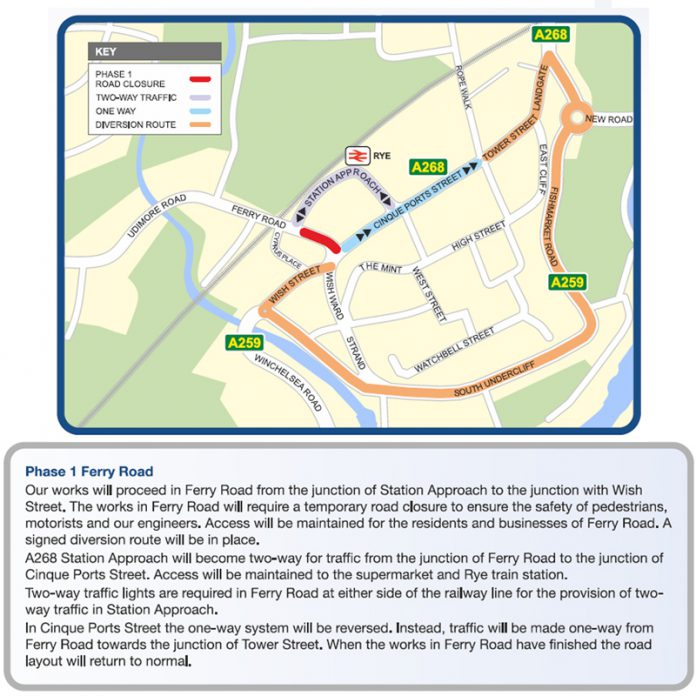 Monday January 12 sees the start of a major gas project in Rye that cannot avoid frustrating drivers as they cross the town. The most worrying part of the project by Southern Gas Networks is Phase 1, in which the one-way section along Station Approach becomes two-way.

The replacement of gas mains was due to start on Monday January 5 and scheduled to end on January 23. The end date is now January 30. The work will affect a survey and cleaning operation of Landgate Tower: this involves closing access to Hilder’s Cliff – from the arch – for three days. Clearly, the two projects could not run at the same time, so work on Landgate will be pushed into February. For Landgate this is the second delay: work was due to begin last month – but Rother agreed to a postponement following a request by Rye’s mayor, Cllr Bernadine Fiddimore, who pointed out how unpopular the closure would be with the town’s traders in the run-up to Christmas.

The maps published here are taken from the Southern Gas website. Go there if you want a copy for yourself.

Rye Cllr Granville Bantick is concerned about the possible dangers to pedestrians caused by the Ferry Road works. “It will mean two-way traffic for the duration of the works,” he told Rye News. His concern, chiefly, is about people walking across Station Approach, as well as the pedestrian crossing in Crown Fields. He urges the building of a light-controlled crossing in Station Approach with “a metal fenced crossing refuge like we see in Hastings and other towns. Money is, of course, never available for such projects unless fatalities can be shown to have happened.”

He added: “It must be borne in mind that we have a high proportion of elderly people in this town as well as many with mobility problems. Let us hope the public will take heed of the dangers when one-way traffic is changed to two-way. That is a black spot at the moment. It will be worse during the works.”

Bantick has written to Chief Inspector Warren Franklin, the Rother police commander, about his fears: “As you will no doubt have been informed there is to be major works in Ferry Road and Wish Ward in Rye to replace a gas main. The scheme involves the temporary closure of Ferry Road from its junction with Cinque Ports Street to its junction with Station Approach. Through traffic will be diverted via Cinque Ports Street/Station Approach. To facilitate the diverted traffic it will be necessary to make Station Approach temporarily two-way.

“The works will be done in phases but I am concerned with the safety of pedestrians crossing as they invariably go directly across the traffic flow from Jempson’s to the station area. This pedestrian flow is particularly noticeable during Thursday’s market day. I would ask whether it is possible to have some police presence to assist those with mobility problems and others to be encouraged to use the pedestrian crossing instead of attempting to cross over the road with traffic travelling two ways.

“We always hope common sense will prevail but human nature as it is will always look for the shortest route when crossing the road.”