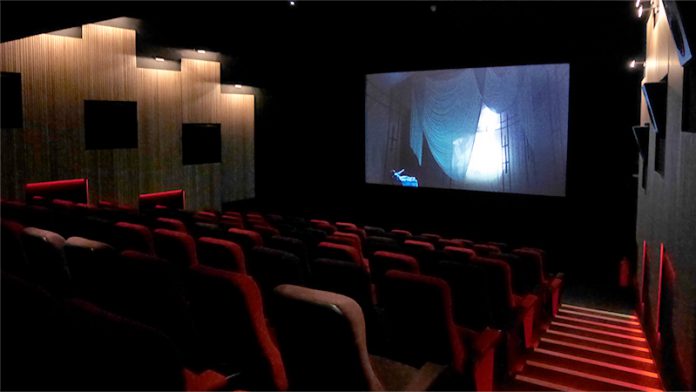 Invited guests were the first to enjoy the Kino cinema when its doors opened on Thursday night (January 15). They were there to see the results of the hard labour and the money that many had poured into the renovation of the old library and adult education centre in Lion Street. After a lot of cocktails, chatter and a constant flow of finger food, the guests snuggled down into the deep seats of the Red Room to watch a screening of Testament of Youth, one of five films showing during the cinema’s first week.

No one involved in the project could be anything but proud: a charming old building has been preserved; a use for it has been chosen that highlights many beautiful features that had been hidden; it will be an added attraction for tourists; the benefit and convenience for residents cannot be questioned; and the increased footfall as cinemagoers walk up through town will undoubtedly benefit traders and businesses.

The evening (see slideshow below) was principally for those involved in the project. Local officials came to show their support, including Amber Rudd MP and Rye’s mayor, Bernadine Fiddimore.

The cinema owes its existence to local people. The saving of the building – listing was quickly applied for and granted or it could have been demolished – and its purchase by three local couples was just the first step. Since then, aside from a £100,000 grant from East Sussex County Council, the finance – more than £900,000 – has been in the form of loans.

Loans have to be repaid. So the cinema has to attract cinema fans with top movies and this is Kino Digital’s role. The company already runs the hugely popular Kino Hawkhurst, and Kino Rye is a step up. Its investment in the fitting out and equipping of the two film theatres and bar/café/restaurant has been substantial. The surroundings are glossier, the seating more comfortable and the catering more substantial. The attention to detail – an enclosed log-burning fire in the restaurant, atmospheric lighting, armchairs – illustrates the effort they have put into making Kino Rye something special.

Many local businesses were involved in the restoration work and, continuing the local theme, Blackbird Catering based in Camber has been chosen to provide the catering. Georgina Holt and Annie O’Carroll – an established chef and former London restaurateur – are accustomed to cooking for private dinners, receptions, weddings, parties and corporate events. Their trademark upmarket canapés were immediately recognisable and hold the promise of high-class fare in the café/restaurant.

The morning after, Matt Breckon, managing director, was so pleased to welcome the first members of the public that free drinks and cakes were instantly offered. Ivo and Julie Fowle from Northiam [pictured below, centre] were happy to accept. They were quickly joined by others “just having a look” and people arriving for the first films of the day, Testament of Youth (10am) in the larger film theatre and Birdman (10.30am) in the smaller.

The weekend should see an invasion of little folk as it’s Kids’ Club time. Each Saturday and Sunday the first film of the day (before 10.30) is for younger viewers: this week it’s Paddington. Kids tickets are £6.50; children under 12 must be accompanied and one adult per child gets in free. The Kids’ Club card should be stamped each time because with five stamps the sixth film is free. Full details of Kino Rye, prices, membership and upcoming films, are all on its website.