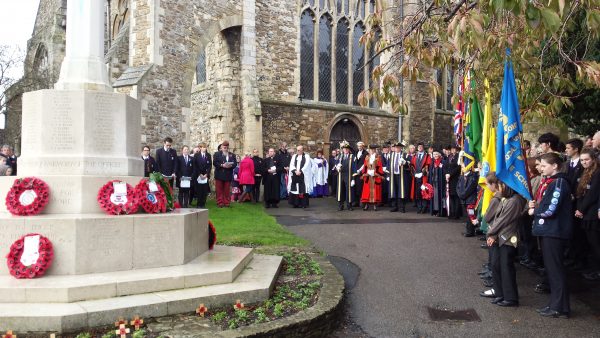 Jackie has lived in Rye for about five years. Previous to that, she spent some time in Peasmarsh, although Jackie grew up in Maidstone near to the British Legion Village.

From an early age Jackie appreciated the valuable work undertaken by the RBL and has subsequently, always been an avid supporter. Her interest in history and military history has taken her to many of the Battlefield sites looked after by the RBL.

Jackie has been given a list of regular volunteers, however, should anyone wish to assist with the poppy collection in any shape or form, please feel free to contact her on 01797 222654 or email Jackie or knock on 6 Jeake Drive, Rye.

Jackie said “I am pleased and proud to be assisting, in some small way, with efforts to keep the poppy and its purpose alive; I look forward to taking forward this new venture and meeting lots of new people”.

The Branch thanks Elizabeth Kimber for all the work she has done over the past three years and for working hard to find a successor and arrangements for a smooth handover.

Work starts now on preparation for the 2017 Poppy Appeal, there is much to do throughout the year!

The Branch is always looking for help and new members, please contact us if you can contribute to the ex-service community of Rye.

Rye & District Branch of the Royal British Legion was formed in the 1920s and now holds its meetings in the George Hotel in Rye on the second Monday of March, June, September and November (AGM).

The Royal British Legion provides financial, social and emotional support to all those who have served and are currently serving in the Armed Forces, as well as their dependants. Anyone who has served in the forces for seven days or more is eligible for our help.

Unfortunately we are unable to assist with requests for help and assistance at a local level, for all inquiries please follow the link Help & Support or all the Freephone number – 0808 8028080 –  at any time between 8am and 8pm, 7 days a week.  Calls from landlines and from most mobile networks will be entirely free of charge.

Rye British Legion arrange a number of activities for members including battlefield tours to France, a recent visit to the Houses of Parliament and the Imperial War Museum.

The branch also maintains a close liaison with other Service organisations in the district, including former members of the Women’s Section, Royal Air Force Association and Rye Sea Cadets as well as acting as a focus for local veterans’ issues.