Last Monday July 17, saw a packed Benson Room at the George in the High Street listen to a presentation by members of the newly-formed Rye group of Extinction Rebellion. In fact so popular was the event that half as many as those in the room had had to be turned away.

The movement hit the headlines for the first time earlier this year when mass, and largely peaceful, protests brought large parts of central London to a halt.

Claiming to have no central leadership, but to be, in essence, a collection of concerned individuals who had gathered together in groups, not just in this country, but around the world.

Their declared aim is to pressurise governments into taking action now, not in twenty years time, to reduce emissions that are harming the atmosphere and causing global warming. And the first part of the presentation was convincing on this aspect – with professional screen-based visuals showing the increase particularly in polar warming and the disparity between the numbers of humans to animals compared with the past – the dramatic increase in domestic livestock with its implications for increased methane as well as forest clearance. 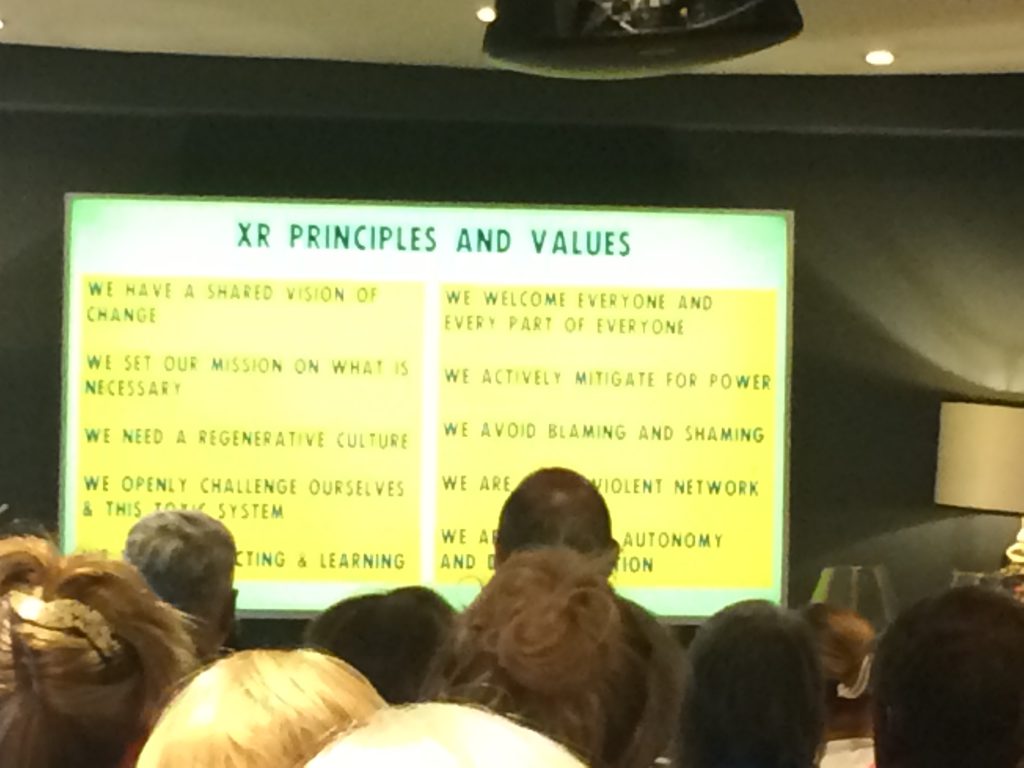 But the organisation is not just a pressure group – though it could be a very effective one. It also has declared political ambitions. The end of government as we currently know it and ‘citizen’ participation in government. It wasn’t fully explained how this would work but one hopes that they are not going to re-try the French experiment of the late 18th century or the Russian on in the early 20th century, neither worked out too well.

A fair proportion of the event was spent on explaining the demonstrations and the legal and other support help that could be available to those arrested. It was also emphasised that this was a peaceful movement and violence had no part to play in their activities.

Altogether an interesting exposition of a new mass movement, but it did leave many unanswered questions.

There was much talk of the problems and their causes together with the need for government to act much faster, but not a lot was said on the detail of what the government (or indeed even a ‘citizens government’ in the new XR Utopia) should actually do, although the implication was, stop driving cars and don’t eat meat.

As a pressure group, Extinction Rebellion clearly has a good and useful place, but so far as any further ambitions go, this reporter came away from the presentation with grave concerns.