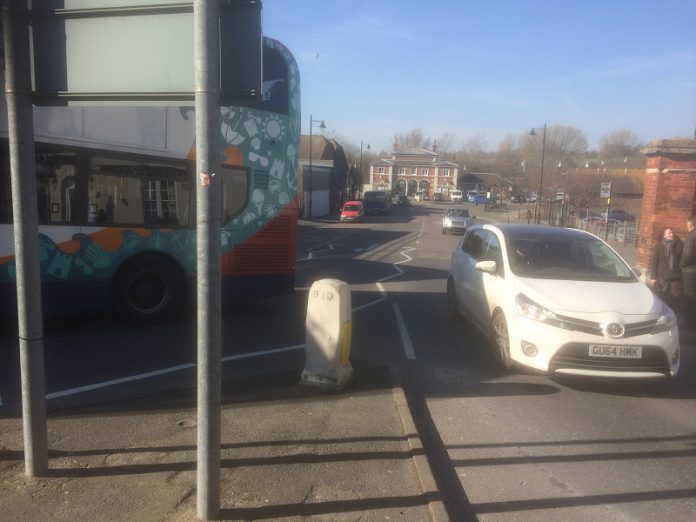 Councillor Harkness’ recent article on Jempson’s extension, and the creation of a blind spot on Station Approach, has generated over a dozen responses from Rye News readers.
Many of the respondents asked why the creation of the blind corner wasn’t picked up in the planning process. Rye News decided to revisit the original application made by Jempson’s in 2013 and reread the local authority’s planning decision.
As a condition to Jempson’s extension the store was asked to contribute £10,000 for “improvements for pedestrians and bus users close to Rye station for the benefit of shoppers and those using this area. Work will include improvement to pedestrian and bus facilities between the store and the railway station, ie narrowing the carriageway to create more space for pedestrians and bus users, and upgrade the bus stops.”
Five years have passed and there is little change to the layout of Station Approach so Rye News contacted East Sussex County Council (ESCC) who, via East Sussex Highways, are the custodian of Station Approach and made enquiries on their current plans for the road and how they intend to spend Jempson’s contribution.
Tracy Vaks, Principal Scheme Development Officer, Economic Development, Skills and Infrastructure Service within ESCC’s Communities, Economy and Transport department confirmed that the original application contained the bus and pedestrian improvement scheme but that it was now no longer going ahead. “This scheme was no longer being taken forward for delivery due to the high costs associated with the scheme, partly due to the location within a conservation area and the additional requirements this presents for construction,” she said.
Ms Vaks went onto confirm that Jempson’s £10,000 contribution to the alignment of Station Approach will now go towards the “Rye Greenway” – a shared pedestrian and cycle route from the Tilling Green area to link with schools and leisure centre facilities (see map below). The Rye Greenway was first mooted in 2011 following a study on the difficulties of cycling around, and through, Rye and is included in both in ESCC’s Local Transport Plan and the draft Rye Neighbourhood Plan. A feasibility study for the Rye Greenway has been prepared by Costain and was submitted to ESCC in February 2017. It includes the proposal for a new pedestrian and cycle bridge over the River Tillingham for an estimated total cost of £900,000. But as you can see from the map, the Rye Greenway will not solve the problems on Station Approach or solve the dangers it presents for pedestrians. Cars travel too fast along this one-way stretch and don’t always stop at the zebra crossing outside Jempson’s. At peak periods the bus stops are heaving with people crammed onto the pavement. This is exacerbated when the trains disgorge their passengers and waiting cars are parked on both sides of the road outside the station obscuring the view to approaching cars entering and leaving the car park.
Station Approach is a poor welcome to visitors arriving in Rye by train but Ms Vaks has confirmed that “there are currently no proposals to undertake works in Station Approach at this time… I’m sure you will appreciate that we need to secure development contributions towards those schemes most likely to come forward.”
As Jempson’s is the biggest development on Station Approach, and their financial contribution has been spent elsewhere, it sees unlikely that there will be any improvement to Station Approach at any time soon.