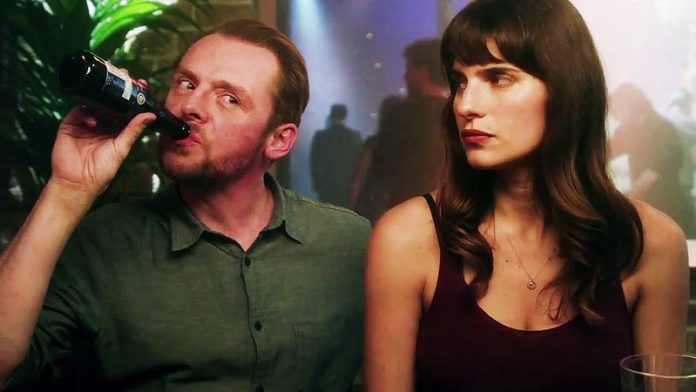 Movies showing at Rye Kino from Friday  June 12 include :

Man Up 88 mins [15]  Meet Nancy: 34, single (still), hung-over (again), and exhausted by the endless futile set ups foisted upon her by well-meaning but clueless friends. As she travels across London to toast another 10 years of her parent’s blissfully happy marriage, 40-year-old, freshly-hatched divorcee Jack mistakes her for his 24-year-old blind date. What follows is a chaotic, unconventional, hilarious night neither of them will ever forget. Starring Simon Pegg, Lake Bell, Olivia Williams, Rory Kinnear, Ken Stott and Ophelia Lovibond, from the director Ben Palmer (The Inbetweeners Movie).

The New Girlfriend 108 mins [15] Subtitled. Starring Romain Durais and Anais Demoustier and based on a story by Ruth Rendell, this is a witty, hilarious take on gender and sexuality from the director Francois Ozon (Potiche, In The House). Claire is a young woman whose closest friend passes away leaving behind a husband, David, and a newborn baby. One day she drops by David’s house unexpectedly and finds him dressed in his dead wife’s clothes, feeding their baby with a bottle… Ozon weaves together a delightful tale of ambiguity and friendship.

Tomorrowland 130 mins [12A]  Bound by a shared destiny, former boy-genius Frank, jaded by disillusionment, and Casey, a bright, optimistic teen bursting with scientific curiosity, embark on a danger-filled mission to unearth the secrets of an enigmatic place somewhere in time and space known only as Tomorrowland. What they must do there changes the world – and them – forever. Disney’s riveting mystery adventure is directed by Brad Bird and stars George Clooney, Hugh Laurie and Britt Robertson.

Clouds of Sils Maria 124 mins [15] Subtitled  Featuring a career-defining performance by Juliette Binoche and an award-winning star turn from Kristen Stewart, Clouds of Sils Maria is a gripping psychological drama and an astute exploration of the acting profession. At the peak of her international career, Maria Enders is asked to perform in a new production of the play that made her famous twenty years ago. But time has passed and she will now play a different part: a character unhealthily obsessed with a beautiful younger woman. Departing to the Swiss Alps to rehearse with her dedicated assistant, Maria begins to see life reflecting art and finds herself drawn into an inexorable web of doubt and fear. Expertly staged by Olivier Assayas (Carlos, Something in the Air), Clouds of Sils Maria is a dazzlingly-performed meditation on power, desire, loyalty and the passing of time.

Home (2D) 94 mins [U] When Oh, a loveable misfit, lands on Earth he forms an unlikely friendship with an adventurous girl named Tip. Through a series of comic adventures, he changes her planet, she changes his world and they discover the true meaning of the word ‘Home’. With the voices of Jim Parsons, Rihanna, Steve Martin, Jennifer Lopez, Matt Jones and Derek Blankenship.

Great children’s films for only £6.50 and for every child ticket bought an adult goes free. Runs as the first film at weekends. Grab a Kids Club loyalty card, have it stamped 5 times and get your 6th ticket free!