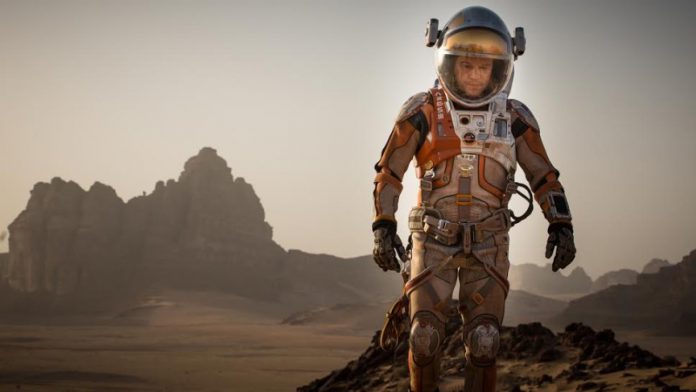 Movies showing in Rye from Friday  October 16  include:

The Martian (2D) & (3D) [12A] 141 mins   During a manned mission to Mars, Astronaut Mark Watney (Matt Damon) is presumed dead after a fierce storm and left behind by his crew. But Watney has survived and finds himself stranded and alone on the hostile planet. With meagre supplies, he must draw upon his ingenuity, wit and spirit to subsist and find a way to signal to Earth that he is alive. Millions of miles away, NASA and a team of international scientists work tirelessly to bring “the Martian” home. Directed by Ridley Scott and starring Jessica Chastain, Kristen Wiig, Kate Mara, Jeff Daniels and Chiwetel Ejiofor.

The Intern [12A] 121 mins   Robert De Niro stars as Ben Whittaker, a 70-year-old widower who has discovered that retirement isn’t all it’s cracked up to be. Seizing an opportunity to get back in the game, he becomes a senior intern at an online fashion site, founded and run by Jules Ostin (Anne Hathaway). A gentle and heart-warming comedy written and directed by Nancy Meyers (It’s Complicated, The Holiday, Something’s Gotta Give, Private Benjamin), also starring Rene Russo and Adam DeVine.

Solace [15] 101 mins  Veteran FBI detective and his younger ambitious partner enlist the help of a reclusive, retired civilian analyst, Dr. John Clancy, to help solve a series of bizarre murders. When Clancy’s exceptional intuitive powers, which come in the form of vivid and disturbing visions, put him on the trail of the killer, the doctor soon realises his gift of second sight is little match against the extraordinary powers of this elusive murderer on a mission. Starring Anthony Hopkins, Colin Farrell, Jeffrey Dean Morgan and Abbie Cornish.

Sicario [15] 121 mins  Emily Blunt, Josh Brolin and Benicio Del Toro star in one of the best reviewed films of the year, a gripping thriller directed by Denis Villeneuve (Incendies, Prisoners). In the lawless border area stretching between the U.S. and Mexico, idealistic FBI agent Kate is enlisted by an elite government task force official to aid in the escalating war against drugs. Led by an enigmatic consultant with a questionable past, the team sets out on a clandestine journey forcing Kate to question everything that she believes in order to survive. Zarafa [PG] 79 mins  Under a baobab tree, an old man tells a story to the children around him: the story of the undying friendship between Maki and Zarafa, an orphaned giraffe, who was sent as a gift from the Pasha of Egypt to the King of France, Charles X. During a long journey that takes them from Sudan to Paris, passing through Alexandria, Marseille and the snow-capped Alps, they have many adventures, but Maki is determined to bring the giraffe back to their native land – even if it means risking his life.

Special events at the Rye Kino to look forward to include :

Rugby World Cup 2015  Catch all the action from the Rugby World Cup on the big screen in the Silver Room at Kino Rye!  Entry is free, but seating is subject to availability so make sure you arrive early! Grab a drink from the fine selection of beers, ales, ciders and wines and treat yourself to something from the delicious menu.

Henry V  LIVE: Wednesday  October 21 at 7pm.   Henry IV is dead and Hal is King. With England in a state of unrest, he must leave his rebellious youth behind, striving to gain the respect of his nobility and people. RSC Artistic Director Gregory Doran continues his exploration of Shakespeare’s History Plays with Henry V performed in the 600th anniversary year of the Battle of Agincourt. Following his performance as Hal in Henry IV Parts I & II Alex Hassell returns as Henry V.  Running time approximately 210 minutes including one interval.

Four short ballets  LIVE: Thursday November 12 at 19:15  Enjoy four short ballets in one evening with this quadruple program from The Royal Ballet. Carlos Acosta focuses on the dramatic essentials of love, jealousy and revenge in his new production of Carmen; Liam Scarlett has used Lowell Liebermann’s thrilling Piano Concerto No.1 as the inspiration for his similarly audacious choreography in Viscera; Debussy’s evocative score is the inspiration for Jerome Robbins’s Afternoon of a Faun; George Balanchine’s Tchaikovsky pas de deux uses a fragment of music composed for the 1877 production of Swan Lake for an eight-minute display of ballet bravura and technique. The programme stars Marianella Nunez, Carlos Acosta, Federico Bonelli, Laura Morera, Ryoichi Hirano, Sarah Lamb, Natalia Osipova and Steven McRae.  Booking at Rye Kino from 11:00 Friday October 23.

The Winters Tale [12A]  LIVE: Thursday  November 26 at 7:15pm  ENCORE: Sunday  November 29 at 2:15pm  The first season of the Kenneth Branagh Theatre Company Live promises an exceptional series of plays broadcast to cinemas from London’s Garrick Theatre over the course of a year. Shakespeare’s timeless tragicomedy of obsession and redemption is reimagined in a new production co-directed by Rob Ashford and Kenneth Branagh, following their triumphant staging of Macbeth in Manchester and Manhattan. Starring Judi Dench as Paulina, Tom Bateman, Jessie Buckley, Hadley Fraser, Miranda Raison and Kenneth Branagh as Leontes.  Booking at Rye Kino from 11am,  Friday October 23.  Running time approximately 210 minutes.