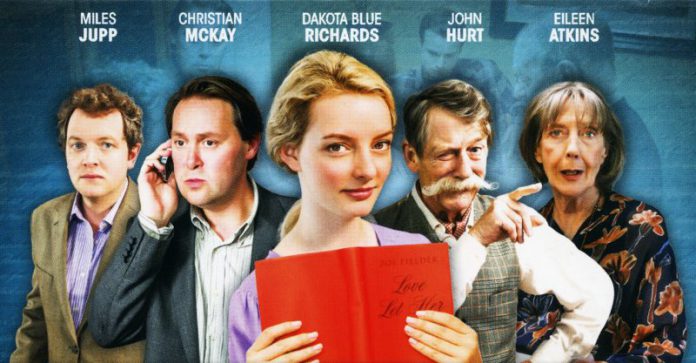 Showing at the Kino from Friday September 9:

Christian McKay, star of ChickLit will be holding Q&A at Kino Rye on Friday 9 September at 8.00pm. All tickets are £10 to include a regular glass of wine, coffee or soft drink.

Christian has starred in a number of Kino favourites including Florence Foster Jenkins, Rush, The Theory Of Everything, Tinker Tailor Soldier Spy, Me And Orson Wells and Northern Soul.

What do you do when your local pub closes down and you want to save it? Write a book of course,  but not any old book. Chicklit is a British comedy drama starring Christian McKay, Dakota Blue Richards, Caroline Catz, John Hurt, Eileen Atkins, James Wilby, Niamh Cusack, Tom Palmer and Cathy Tyson.

Bad Moms [15] 101 mins   In this new comedy from the writers of The Hangover, Amy has a seemingly perfect life – a great marriage, over-achieving kids, beautiful home and a career. However she’s over-worked, over-committed and exhausted to the point that she’s about to snap. Fed up, she joins forces with two other over-stressed mums on a wild, un-mum-like binge of long overdue freedom, fun and self-indulgence – putting them on a collision course with PTA Queen Bee Gwendolyn and her clique of devoted perfect mums. Starring Mila Kunis, Kathryn Hahn, Kristen Bell, Christina Applegate and Jada Pinkett Smith.

Julieta [15] 99 mins subtitled  Julieta lives in Madrid with her daughter Antía. They both suffer in silence over the loss of Xoan, Antía’s father and Julieta’s husband. But at times grief doesn’t bring people closer, it drives them apart, and when Antía turns eighteen she abandons her mother without a word of explanation. Julieta is about a mother’s struggle to survive uncertainty and that unfathomable mystery that leads us to abandon the people we love, erasing them from our lives as if they had never existed. Nominated for a Palme d’Or at Cannes 2016, directed by Pedro Almodóvar and starring Emma Suárez and Adriana Ugarte.

Valley of Love [15] 92 mins subtitled  Two of French cinema’s most prolific performers, Isabelle Huppert and Gérard Depardieu reunite to play an estranged couple meeting for the first time in years. Their photographer son Michael has requested that they visit a series of remote locations outlined in a note prior to his suicide six months earlier. Respecting their son’s wishes, they put their personal grievances to one side and proceed to confront the wounds of the past. Valley of Love reignites the chemistry between Depardieu and Huppert, both giving tender and deeply felt performances.

Born to be Blue [15] 98 mins   In the 1950s, Chet Baker was one of the most famous trumpeters in the world, renowned as both a pioneer of the West Coast jazz scene and an icon of cool. By the 1960s, he was all but washed up, his career and personal life in shambles due to years of addiction. Creatively blending fact with fiction and driven by Ethan Hawke’s virtuoso performance, Born to Be Blue unfolds at a key moment in the 1960s, just as Baker attempts to stage a hard-fought comeback, spurred in part by a passionate romance with a new flame.

Swallows & Amazons [PG] 97 mins  An enchanting new take on the beloved novel by Arthur Ransome, Swallows & Amazons tells the story of the Walker children, whose summer holiday in the Lake District sees them sailing out on their own to a local island, only to find themselves in competition with a rival group of children who call themselves the Amazons and ultimately an adventure far bigger than they could have imagined. Combining a great British cast with stunning locations and a classic story, Swallows & Amazons is an exciting and heart-warming adventure that will be a must-see for family audiences this summer. Directed by Philippa Lowthorpe and starring Kelly Macdonald, Rafe Spall, Andrew Scott, Jessica Hynes, Richard Bremmer and Harry Enfield.

Pete’s Dragon (2D) & (3PGD) 103 mins   For years, old wood carver Mr  Meacham has delighted children with his tales of the fierce dragon that resides deep in the woods. To his daughter, Grace, who works as a forest ranger, these stories are little more than tales until she meets Pete, a mysterious 10-year-old with no family and no home who claims to live in the woods with a giant, green dragon named Elliott, who seems remarkably similar to the dragon from Mr Meacham’s stories. Grace sets out to determine where Pete came from, where he belongs and the truth. Starring Robert Redford, Bryce Dallas Howard and Oakes Fegley.

Further events at Kino include the following:

Turandot from Sydney Harbour   Screening for one night only in cinemas across the UK on Thursday September 15. Don’t miss this incredible opera event with lavish sets, extraordinary costumes and a spectacular firework display from Sydney’s beautiful harbour. When the heroic high notes of ‘Nessun Dorma’ ring out, your soul stirs. It is impossible to resist – the climax of an exotic adventure, captured perfectly in music. Set against the magnificent backdrop of the Sydney Opera House, Puccini’s Turandot recounts the Chinese fable of the beautiful and powerful Princess Turandot.

The Beatles Live Event: Eight Days a Week  Screening live at Kino Rye on Thursday September 15 at 6pm  We are delighted to be screening the highly anticipated documentary feature film about The Beatles’ phenomenal early career with a World Premiere in London’s Leicester Square, a star-studded red carpet event which will be live streamed to Kino Rye. Directed by Oscar-winner Ron Howard, this is the not-to-missed story of the band’s exceptional touring years – an intimate portrait of the band, and a behind-the-scenes look at The Beatles on tour. Exploring the effect it had on their relationships, as well as their musical evolution, and looking at how they transformed the world of music, the film features interviews, unheard music and exclusive concert footage from the biggest band of all time.

Cymbeline  LIVE: Wednesday September 28 at 7pm  Screening live from Stratford-upon-Avon, Shakespeare’s rarely performed tragicomic romance is directed by Melly Still who designed Tales from Ovid and Midnight’s Children for the RSC. Melly directs Gillian Bevan in the role of Cymbeline, the first woman to take on the role for the RSC, and Bethan Cullinane as Imogen. Cymbeline is Shakespeare’s coming of age tragicomic romance. A story of power, sexuality and identity – stunningly retold for the 21st century.  Running time approximately 210 minutes including an interval.

Miss Saigon: 25th Anniversary Gala Performance [15]   Sunday October 16 at 7:30pm  Miss Saigon has been a huge audience favourite since it first hit the UK stage and with songs by Schonberg & Boublil (Les Miserables) it has had two very successful West End runs, a barnstorming Broadway outing, plus a sell-out UK regional tour back in 2004. This spectacular, sell-out 25th Anniversary Gala Performance of the global stage sensation features many of the original cast (including Olivier & Tony Award winners Jonathan Pryce and Lea Salonga) who are returning to the stage to celebrate the long-running musical hit.

Cosi Fan Tutti LIVE: Monday October 17 at 6:30pm  How much do you love your partner? How much do you trust them? And can they trust you? Mozart’s classic opera Così Fan Tutte puts two pairs of lovers to the test – with great music but distinctly unexpected results. For this new production, director Jan Philipp Gloger creates a richly theatrical world as the playground for this quirky comedy, where two men try to woo each other’s partners for a bet. This lively, youthful and imaginative take on one of the world’s best-loved operas is conducted by Semyon Bychkov and stars Daniel Behle, Alessio Arduini, Johannes Martin Kränzle, Corinne Winters, Angela Brower and Sabina Puértolas.

King Lear LIVE: Wednesday October 12 at 7pm  King Lear has ruled for many years. As age begins to overtake him, he decides to divide his kingdom amongst his children, living out his days without the burden of power. A proud man, he allows vanity to cloud his judgment, believing that he can relinquish the crown, but enjoy the same authority and respect he has always known. Misjudging his children’s loyalty he soon finds himself stripped of all the trappings of state, wealth and power he had taken for granted. Alone in the wilderness he is left to confront the mistakes of a life that has brought him to this point. Starring Antony Sher, Paapa Essiedou, Nia Gwynne, Natalie Simpson and Graham Turner.