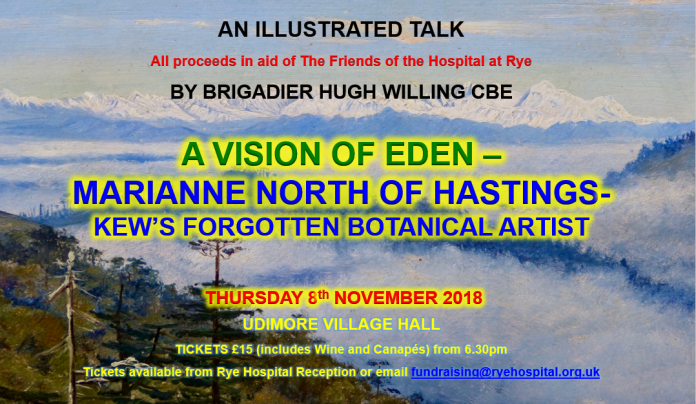 Artist Marianne North, who was born in Hastings in 1830 where her father was the local MP until 1869, is now largely forgotten in East Sussex. But between 1871 and 1884 she travelled all over the world to paint flowers, trees, shrubs, and fruits and seeds, and unusually for a botanical artist, she also added landscape background and birds, insects and animals which brought depth, scale and interest to her pictures.

She was one of a number of intrepid Victorian women who captured the imagination of the British public at the time, but whose achievements have since been largely forgotten. However the Marianne North Gallery in Kew Gardens holds 833 of her paintings, which in 2012 received a £1.2 million Heritage Lottery Fund Grant to help towards restoration of her pictures and refurbishment of the gallery.

Brigadier Hugh Willing will be giving a richly illustrated talk on this neglected botanical artist, in Udimore Hall, at 6:30pm on November 8.

Hugh was a professional soldier for 36 years before retiring to his wife’s family home in Staplecross in 2007. He was born in Kenya and has travelled widely in Europe, the Mediterranean, Africa, Arabia and the Far East both in a military and private capacity. He now travels the world on cruise ships as a lecturer in British military and colonial history.

All proceeds are in aid of the Friends of Rye hospital. Tickets cost £15, to include wine and canapes, and can be bought by email or from the hospital reception.