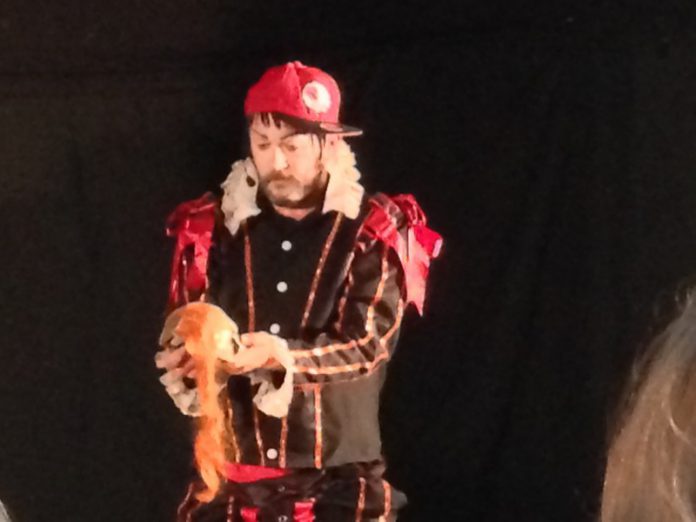 The touring group Pocket Oxford took over the marquee at Lamb House on Saturday September 19, to stage a wonderful version of Hamlet that had the audience screaming with laughter, adults as much as children. The story of Hamlet was retold, also starring  William Shakespeare and Odious, his servant. Teds Walker, who was also the Artistic Director, played Shakespeare and Hamlet, and  Jonathan Richardson played almost everyone else.

Lightning costume changes, brilliant acting and use of music (Bohemian Rhapsody, Circle of Life etc) made the plot comprehensible and coherent. But when it came to the play within a play, where Hamlet hijacks a planned performance by the Muppets of the Murder of Gonzo, to retell the story of the killing of his father by uncle Claudius, reinforcements were needed.

Several children from the audience were commandeered to take the parts of cast characters. They did a brilliant job. The young man who played Polonius (Hamlet’s girlfriend’s father), threw himself into the role with gusto and great success. But when they were looking for their final actor, the little girl who firmly announced “I am the one, but I am just going to the toilet” stole the show. The actors ad libbed until her triumphant return as Queen Gertrude.

It is hard to believe that the story of Hamlet could be told so clearly in just an hour and 15 minutes, but it was. And we covered a lot of other ground as well – the uncanny parallels with the Lion King were exposed, we enjoyed pirate jokes, and observed the tendency of Hamlet to behave like a “depressed emo”.

Pocket Oxford put on about 150 shows a year, mainly to schools, but they do the occasional public performance so do look out for them. Although they are advertised as geared for children, adults will find the shows very entertaining and accessible.