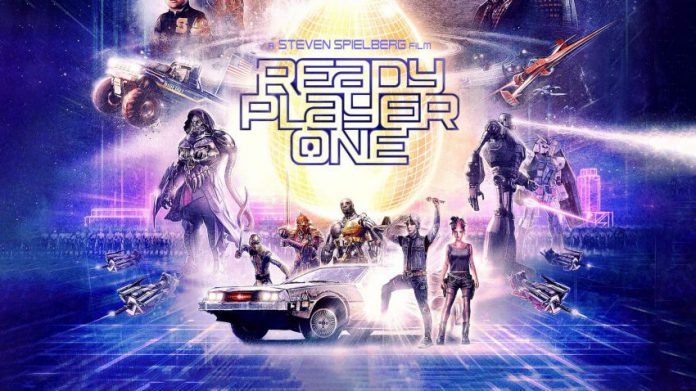 Films showing from Friday March 30 at the Kino, Rye

Ready Player One (2D & 3D)[12A] 140 mins
When the creator of a virtual reality world called the OASIS dies, he leaves his immense fortune to the first person to find a digital Easter egg he has hidden, sparking a contest that grips the entire world. When an unlikely young hero decides to join the contest, he is hurled into a breakneck, reality-bending treasure hunt through a fantastical universe of mystery, discovery and danger. Directed by Steven Spielberg and starring Tye Sheridan, Hannah John-Kamen, Ben Mendelsohn, Mark Rylance, Olivia Cooke and Simon Pegg.
Peter Rabbit [PG] 95 mins (also Kids’ Club, see below)
Peter Rabbit and his three sisters enjoy spending their days in Mr McGregor’s vegetable garden. When one of McGregor’s relatives suddenly moves in, he’s less than thrilled to discover a family of rabbits in his new home. A battle of wills soon breaks out but Peter is a resourceful rabbit who proves to be a worthy and wily opponent. With the voices of James Corden, Domhnall Gleeson, Rose Byrne, Margot Robbie, Elizabeth Debicki and Daisy Ridley.
Game Night [15] 100 mins
Jason Bateman and Rachel McAdams  star as Max and Annie, whose weekly couples game night gets kicked up a notch when Max’s charismatic brother Brooks arranges a murder mystery party, complete with fake thugs and faux federal agents. So when Brooks gets kidnapped, it’s all part of the game – right? But as the six uber-competitive gamers set out to solve the case and win, they begin to discover that neither this game – nor Brooks – are what they seem to be. Also starring Kyle Chandler Jesse Plemons, Billy Magnussen and Sharon Horgan.
The Square [15] 151 mins, subtitled. Winner of the Palme D’Or at Cannes 2017
Force Majeure director Ruben Östlund returns with a hilarious, unique and often surreal satire starring Claes Bang, Elisabeth Moss and Dominic West. Christian is the respected curator of a contemporary art museum in Stockholm whose views on social responsibility are put to the test when he becomes the victim of a scam, forcing him to question the world around him and his place in it.
The Shape of Water [15] 123 mins
Winner of four Oscars, three BAFTAs and two Golden Globes including Best Picture and Best Director
Elisa is a mute, isolated woman who works as a cleaning lady in a hidden, high-security government laboratory in 1962 Baltimore. Her life changes for ever when she discovers the lab’s classified secret – a mysterious, scaled creature from South America that lives in a water tank. As Elisa develops a unique bond with her new friend, she soon learns that its fate and very survival lies in the hands of a hostile government agent and a marine biologist. Directed by Guillermo del Toro and starring Sally Hawkins, Octavia Spencer Michael Shannon and Richard Jenkins.
Three Billboards Outside Ebbing, Missouri [15] 115 mins
Winner of two Oscars, five BAFTAs and four Golden Globes including Best Actress (Frances McDormand) and Best Supporting Actor (Sam Rockwell)
A darkly comic drama from Academy Award winner Martin McDonagh (In Bruges). After months have passed without a culprit in her daughter’s murder case, Mildred Hayes makes a bold move, painting three signs leading into her town with a controversial message directed at William Willoughby, the town’s revered chief of police. When his second-in-command, Officer Dixon, an immature mother’s boy with a penchant for violence gets involved, the battle between Mildred and Ebbing’s law enforcement is exacerbated. Starring Frances McDormand, Woody Harrelson, Sam Rockwell, Abbie Cornish, Peter Dinklage and Samara Weaving. Peter Rabbit [PG] 95 mins (also main menu, see above)
Peter Rabbit and his three sisters enjoy spending their days in Mr McGregor’s vegetable garden. When one of McGregor’s relatives suddenly moves in, he’s less than thrilled to discover a family of rabbits in his new home. A battle of wills soon breaks out but Peter is a resourceful rabbit who proves to be a worthy and wily opponent. With the voices of James Corden, Domhnall Gleeson, Rose Byrne, Margot Robbie, Elizabeth Debicki and Daisy Ridley.
This runs for the first film at weekends and at various other times (see quick-view listings page).
Great children’s films for just £8 and for every child ticket bought, an adult goes free. Grab a Kids’ Club loyalty card, have it stamped five times and get your sixth ticket free.

Forthcoming special events at The Kino

Kino special:
Finding Camille + Q&A,  92 mins Sunday and Monday April 22 and 23 at 8pm. In English and Italian with subtitles
Director Bindu de Stoppani will host the showing of this film with Q&As. The witty comedy-drama is Bindu’s second feature, first screened at the 12th Rome Film Fest and continuing to show at festivals all round the world. Bindu is an accomplished actress, writer and director and has set up her own theatre and film companies.
When dutiful and loyal Camille decides to go on a road trip down memory lane with her Alzheimer’s suffering father, she must learn to let her father go or risk losing her own chance at a life and happiness. Finding Camille is the moving and at times heart-breakingly humorous story of a father and daughter on a  journey to get to know each other and of the opportunities that occur in life to live for the moment.
Royal Ballet Live:
Manon (2018), Thursday May 3 at 7:15pm; booking from 2pm Friday March 23. Approximately 155 mins including an interval.
Kenneth MacMillan’s source for Manon was the 18th-century French novel, where he found new sympathy with the capricious Manon and her struggle to escape poverty. But it is Manon and Des Grieux’s impassioned pas de deux – recalling the intensity of MacMillan’s earlier Romeo and Juliet – that drive this tragic story, and make Manon one of MacMillan’s most powerful dramas. Starring Sarah Lamb, Vadim Muntagirov, Ryoichi Hirano, Itziar Mendizabal and Gary Avis.
Matthew Bourne’s Cinderella:
Tuesday May 15 at 7pm with live satellite Q&A with Matthew Bourne after the screening. Booking from 2pm Friday March 23; running time approximately 150 minutes including an interval
Matthew Bourne’s Cinderella is a thrilling and evocative love story set in London during the Second World War. The internationally acclaimed choreographer’s interpretation of the classic fairy tale has, at its heart, a true wartime romance. Bourne’s vivid story telling has never been more heart-stopping and touching, and will take the audience into the heart of Prokofiev’s magnificent score. Starring Ashley Shaw, Andrew Monaghan, Michela Meazza, Liam Mower and Alan Vincent.
An American in Paris: The musical
Wednesday May 16 at 8pm. Running time approximately 150 minutes including an interval. Booking from 2pm Friday March 23
With a record-setting 28 five-star reviews from critics, this breathtakingly beautiful Tony Award-winning Broadway musical, inspired by the Oscar winning MGM film, tells the impassioned story of discovering love in the City of Light. Featuring the gorgeous music and lyrics of George and Ira Gershwin (including the classic hits ’S Wonderful and I Got Rhythm), stunning designs and show-stopping choreography.
The Dam Busters at 75: LIVE from the Royal Albert Hall
Thursday May 17 at 7:15pm. Running time approciamately 122 mins including an interval. Booking from 2pm Friday March 23
This year marks the 75th anniversary of the original Dam Busters raid and to mark the anniversary Kino Rye will be screening a special programme live from The Royal Albert Hall.
Dan Snow will be joined on stage by the Glenn Miller Orchestra plus special guests including family members of both Dam Busters’ crew and the film’s director Michael Anderson, historian Paul Beaver and Professor Hugh Hunt as they explore the history of the iconic raid and how it led to the making of a classic British film. Digitally remastered for the occasion, The Dam Busters will be screened following the show.
Kino member free tickets cannot be used for Live, NT, RSC, opera, ballet or special events.
For further information and booking visit Kino Rye or check the quick-view listings page.