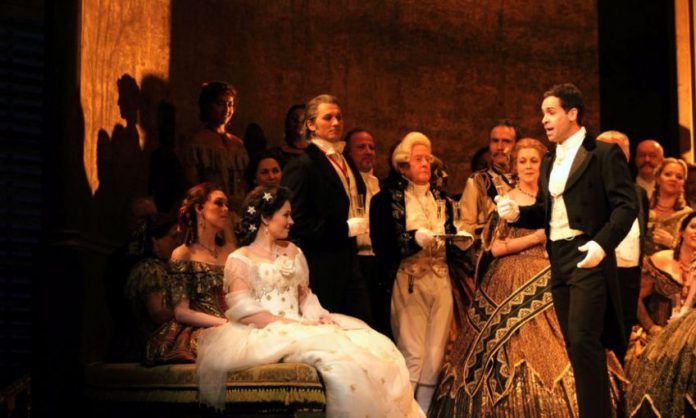 Wednesday, January 30, 6:45pm; encore performance Monday, February 4, 7pm; both booking now
From the thrill of unexpected romance to a heartbreaking reconciliation that comes too late – Verdi’s La Traviata is one of the most popular of all operas. Alfredo falls in love with the courtesan Violetta in glamorous Paris society, but underneath the surface run darker undercurrents, leading to a tragic ending. Richard Eyre’s production brings out all the emotional colour, from the giddy discovery of love, through painful confrontation to the inevitable conclusion. Starring Ermonela Jaho, Charles Castronovo and Plácido Domingo.

Thursday, January 31, 2019, 7pm
An explosive new play by David Hare (Skylight), premiering at the National Theatre. Pauline Gibson has spent her life as a doctor, the inspiring leader of a local health campaign. When she crosses paths with her old boyfriend, a stalwart loyalist in Labour Party politics, she’s faced with an agonising decision. What’s involved in sacrificing your private life and your peace of mind for something more than a single issue? Does she dare? Starring Siân Brooke, Owen Findlay, Alex Hassel, Harry Long and Joshua McGuire.

Wednesday, February 6 at 5:50pm; booking from Friday, January 25 at 2pm
This special event screening will be followed by a live satellite Q&A with director/actor Kenneth Branagh and writer Ben Elton.
The year is 1613, and Shakespeare is acknowledged as the greatest writer of the age. But disaster strikes when his renowned Globe Theatre burns to the ground. Devastated, Shakespeare returns to Stratford, where he must face a troubled past and a neglected family. Haunted by the death of his only son, Hamnet, he struggles to mend the broken relationship with his wife and daughters. In so doing, he is ruthlessly forced to examine his own failings as a husband and father. Directed and starring Kenneth Branagh as the Bard himself, written by Ben Elton and starring Judi Dench, Ian McKellen, Lolita Chakrabarti and Kathryn Wilder.

Thursday, February 7 at 8pm; booking now
Many films have dealt with Pablo Picasso’s later years – the art, the affairs and the wide circle of friends. But where did this all begin? The film explains how this young artist acquired his craft. Looking carefully at two key early periods – the so-called Blue Period and the Rose Period – the film takes us to 1907 and the creation of a critical painting in the history of art: Les Demoiselles d’Avignon. It was a painting that shocked the art world but changed it irrevocably. Picasso was just 25 years old. Working closely with all three Picasso Museums in Malaga, Barcelona and Paris this film explains how he rose to great heights.

Tuesday, February 19, 7:15pm; booking now. Live from Covent Garden
Cervantes’s story of the bumbling knight Don Quixote has inspired countless artistic interpretations. Marius Petipa choreographed this sparkling ballet about the encounters of the man from La Mancha and his faithful squire Sancho Panza. At its heart are virtuoso roles for the lovers Basilio and Kitri.

Carlos Acosta chose this joyful classic for his first production for The Royal Ballet. His vibrant staging brings together the whole company in such roles as exuberant villagers, passionate gypsies and even fantasy flowers. The story follows Don Quixote’s picaresque journey to do deeds in honour of his imaginary noble lady, Dulcinea. Sunny, charming, funny and touching – Don Quixote is a ballet as full of uplifting emotion as it is of astonishing ballet technique.

NT Live: All My Sons, starring Sally Field and Bill Pullman – Tuesday, May 14

RSC Live: The Taming Of The Shrew – Wednesday June 5