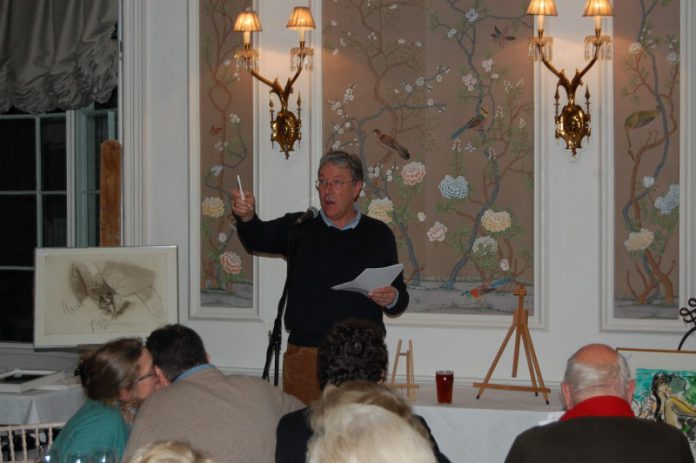 Fans of The Archers  were at The George in Rye on Wednesday night [November 26] to see actor Tim Bentinck – David Archer in the long-running drama series on Radio 4 – auctioning fine art for charity. They were well entertained, as were we all, onlookers, punters and supporters of the Fletcher cinema project, who were aiming to raise funds to help with the building and preservation work on the site, now nearing completion in Lion Street.

All 45 lots for auction had  been donated by the artists or owners, working and living in and around Rye. Paintings by regular exhibitioners at Rye Art Gallery and the annual Rye Society of Artists’ summer show were interspersed with pieces from other times and places. The two undoubted highlights in value were Seated Girl by Edward Piper, and Citadel Garden by Louis Turpin, which each fetched £2,000 on single bids.

The auction sale started in slow motion, with somewhat restrained and desultory bidding, at one point leading the auctioneer to exclaim: “ You’ve been sitting here not bidding £50, but waiting for the big one, but is it going unsold at £2,000? No! It’s sold to the gentleman in the orange shirt.” Other lots attracted bids from Italy and France; The Phantom of the Opera was knocked down to a Monsieur Pierre: “It eez un snip,” cried the auctioneer. He was ably assisted by Niki Stuart (see photo below), who did an admirable turn as auction-house porter. For some works, such as the silkscreen lithograph Untitled by Therese Oulton, there was fierce competition – well, polite competition, because it is Rye after all.

Chairman Mike Eve thanked everyone for their generous contributions, commenting that Tim Bentinck had done a marvellous job in creating an exciting atmosphere. The proceeds of the evening’s entertainment came to over £11,000, much to the delight of the event organisers. The money would be put towards restoring the fabric of the former art room and completing the outstanding building works, in readiness for the first opening, hopefully before Christmas.

For more information on Rye’s new cinema, visit the website.