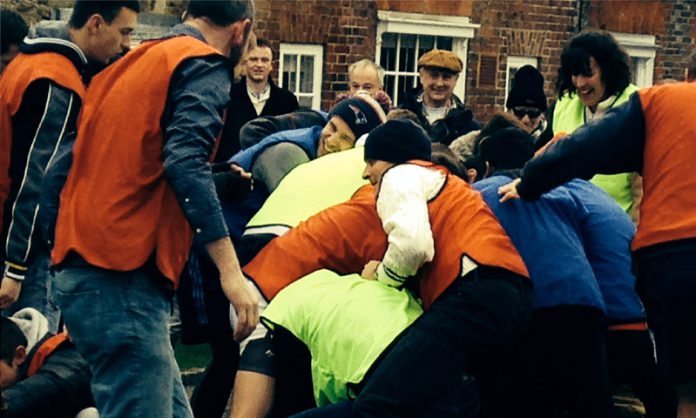 Playing Despite their being only a few miles of sea separating us, it is frequently claimed that the French and the English remain sworn enemies and  the ancient Winchelsea Streete Game would appear to support this assessment. Crowds turn out to watch – and some to play – in this unusual Boxing Day event in which three teams try to get the “Frenchman’s Head” into one goal in a game with no rules.

The game was started up in 1990s “for the first time in 700 years”. Many residents will testify to its ancient origins and tales abound of civic mayhem and even fatalities in previous centuries. Before the game, the players and onlookers took an oath to deny they were at the event. As has become traditional, the result of the game was decided before the match, but the results were placed in a sealed envelope to prevent jiggery-pokery.

This year it was claimed that this method of deciding the result had been approved by Judge Eckert of Fifa! And it was also suggested that next year’s game had been sold to Qatar in an above-board bidding process supervised by the international football federation!

But, as usual, after 15 minutes of intense struggle in something akin to an early 19th-century rugger match, bruised players and a delighted audience retired to the New Inn.

Kicking a Frenchman’s head about is not the only post-Christmas tradition in Winchelsea. Also popular is the Mummers’ Play, performed by members of the Winchelsea Bonfire Boyes on the evening of the first Sunday of January at the New Inn. The play is based on a traditional Peasmarsh script, albeit with unique Winchelsea variations including a version of “The Spaniard Who Blighted My Life” lampooning one of the players!

Visitors to Winchelsea in search of less excitement were able to stroll around and view the town’s Advent Windows, which raised £156 for the Rye, Winchelsea and District Memorial Hospital. The event, organised by Graham and Sally Rhodda, continued to delight, with some very original window displays on the theme of Christmas carols.