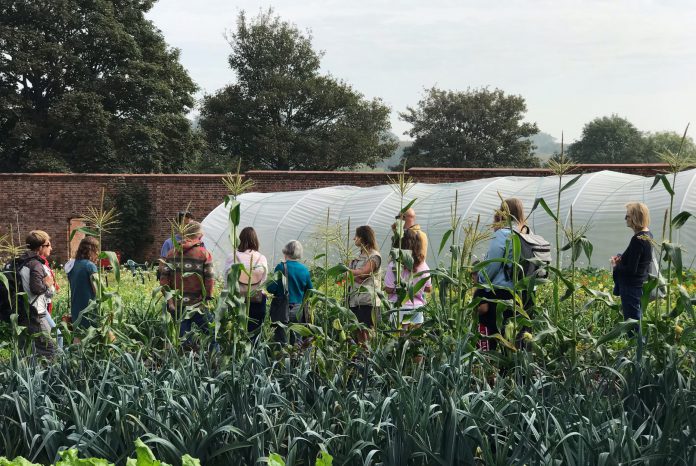 Hands of Hope (HoH) lies within the southern part of the village of Hawkhurst, Kent. It is a large part of the former grounds of Hall House, a medieval residential complex, now significantly modified, comprising woodland, pasture and the old walled garden, originally built within the 15th century. The walled garden was the horticultural and farming complex around the house, structured around 1910 to grow produce for the house’s kitchen. The house was destroyed by fire and stood derelict for ten years until a developer took it on and built six apartments on the site. The walled garden remained hidden and rather neglected until it was rescued by Hands of Hope.

James Doran, who had moved to Kent, founder of HoH decided the 22 acre site of the walled garden and beyond was a good investment, started the process of acquiring it in 2018 and secured it in 2019. He had a vision. He wanted to develop this natural environment and restore it for the wellbeing of the community in an ever-hectic modern world, following the 25 year plan of Department of Environment, Food and Rural Affairs (DEFRA). This states that spending time in the natural environment improves mental health and feelings of well being which in turn reduces stress, combats loneliness and gets the community together. This has become the mission of James and his team along with growing organic food. The produce is used to feed schoolchildren, is given to food banks including Rye’s and used to prepare lunch in three places, once a week.

Over time the team has developed HoH into an amazing space where different groups and individuals can come to a place to learn about food growing and access affordable produce. It enables people to feel welcomed and connected, and this sense of inclusivity creates a resilient community of various backgrounds, age and ability. The ethos is to break down barriers, increase skills, provide training in organic horticulture and traditional rural crafts as well as making people aware of ecological issues and understand biodiversity. They are addressing food poverty and food waste and facilitate outreach programmes throughout Rother and Kent.

The newest initiative is the Great British Brick Off (GBBO) which launched in May this year. The project has two objectives. One is to restore part of the wall of the garden and the second to have teaching sessions for anyone interested in bricklaying without having any prior experience. The bricks had to be cleaned before the restoration could begin. It has been well received by all ages wanting to learn a new skill.

HoH are looking for bricklayers, joiners and metalworkers who could possibly donate a day to help. It is important the wall is built to make the garden safer for vulnerable and marginalised groups.

They have a large number of volunteers but there is always room for more, to do the many things to make the farm work and deliver all the goals of the team, including increasing the sessions to learn bee keeping.

The icing on the cake is the news that they had received the 2022 Queen’s Award for Volunteering Service. Representatives from HoH will be getting their award later this year and two volunteers from the charity will attend a garden party at Buckingham Palace in May 2023.

What has been achieved and the vision for the continued development of the site is amazing as are the people running it. For further information please email info@hohcharity.com or go to www.hohcharity.co.uk