Pett Level Independent Rescue Boat (PLIRB) had unwelcome visitors and an even nastier surprise on Friday, May 15.

Locals alerted the charity’s volunteers to the fact that, despite lockdown restrictions not yet being fully lifted, three individuals had set up a small camp in the area of the boathouse. The group, who were calling themselves “Border Patrol”, then started live-streaming provocative messages on YouTube, inciting others to join them in anti-social activity.

Much of this live streaming, which involved foul and inflammatory language, some of which could certainly be considered as hate-speech, took place in sight of the boathouse which has the charity’s name and logo flag visible.

In other sections of their filming, one of the men was seen interfering with PLIRB property in order to retrieve a specific Pett Level Independent Rescue Boat sign. Two of the group then made a point of having a “photoshoot” standing “under the Pett Rescue” (audible on the video), holding the sign they’d appropriated.

The third member of the group then filmed them passing on their message to their audience in a clear act of misrepresentation of the charity and its services, especially considering the message content in the video as a whole. 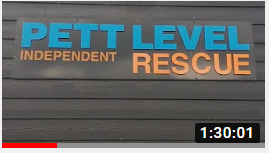 This issue of misrepresentation and appropriation of the charity’s sign is also apparent by the fact that the ‘still’ image (being used to share the video) is that of the rescue charity’s boathouse signage, as this screenshot image shows.

The Pett Level Independent Rescue Boat Association is a legitimate community charity and independent rescue service which protects all users of the local coast line. The charity does not hesitate, or discriminate, when it comes to helping save lives along the coast between Fairlight and Camber.

“These individuals and their activities were reported to the authorities at the time, and again later on. Their videos and social media channel have also been reported and we await confirmation that these have been removed.

“We are extremely grateful to locals down at Pett Level who informed us of the situation and made us aware of the videos. As a charity which sets out to preserve life at sea and to support all, we ask that anyone who sees the videos or spots these men at our boathouse should be aware that these individuals are not part of Pett Level Independent Rescue Boat, they do not represent us and we do not share their views.

“As well as volunteering to provide a vital services in the community, we are now also having to spend time working hard behind the scenes to have these videos – which are not associated with us at all, yet have our name clearly visible – removed from social media.

“We’d be grateful for the support of the public. If anyone does spot these videos continuing to circulate on social media or stills from their “photoshoot”, with our boat house, logo and signage visible, please report it to the platform immediately.”

Reporting is the right response

In respect of the activities of the group, the charity’s local community police contacts have confirmed that if this type of activity is seen again at the boathouse or along the local coastline, it is to be reported immediately on 999.

As the official Border Force are regularly seen in the area, they too request that if there is any recurrence, where anyone not in the official capacity is calling themselves “Border Patrol” and is carrying out patrol activities, then this should be reported at once using 999.

At the time of this report for Rye News going live, Pett Level Independent Rescue Boat confirm that the videos have still not been removed by the platform concerned.

For legal reasons, we are not publishing any comments on this story.